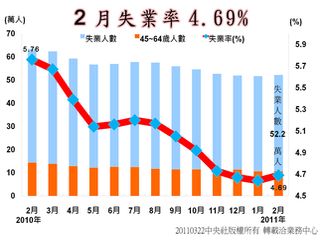 Taiwan's seasonally adjusted unemployment rate fell for the 18th consecutive month in February to 4.59 percent, down 0.12 percentage points from January, according to the country's statistics bureau.

It was the first monthly increase in the country's nominal unemployment rate after six consecutive months of decline.

DGBAS official Chen Min attributed the increase in the nominal jobless rate to the termination of temporary or short-term jobs before the Lunar New Year and to a rise in the number of workers changing jobs after the New Year.