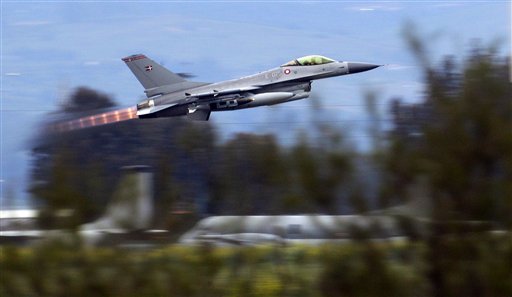 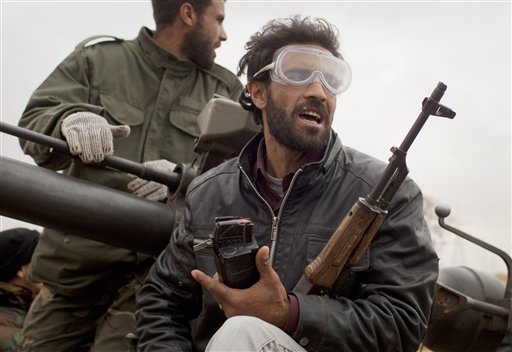 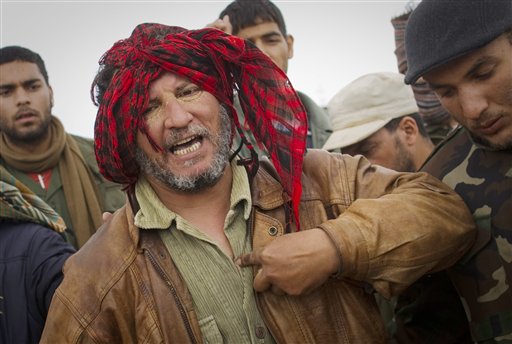 Coalition forces bombarded Libya for a third straight night Monday, targeting the air defenses and forces of Libyan ruler Moammar Gadhafi, stopping his advances and handing some momentum back to the rebels, who were on the verge of defeat just last week.

But the rebellion's more organized military units were still not ready, and the opposition disarray underscored U.S. warnings that a long stalemate could emerge.

The air campaign by U.S. and European militaries has unquestionably rearranged the map in Libya and rescued rebels from the immediate threat they faced only days ago of being crushed under a powerful advance by Gadhafi's forces. The first round of airstrikes smashed a column of regime tanks that had been moving on the rebel capital of Benghazi in the east.

Monday night, Libyan state TV said a new round of strikes had begun in the capital, Tripoli, marking the third night of bombardment. But while the airstrikes can stop Gadhafi's troops from attacking rebel cities — in line with the U.N. mandate to protect civilians — the United States, at least, appeared deeply reluctant to go beyond that toward actively helping the rebel cause to oust the Libyan leader.

President Barack Obama said Monday that "it is U.S. policy that Gadhafi has to go." But, he said, the international air campaign has a more limited goal, to protect civilians.

"Our military action is in support of an international mandate from the Security Council that specifically focuses on the humanitarian threat posed by Col. Gadhafi to his people. Not only was he carrying out murders of civilians but he threatened more," the president said on a visit to Chile.

In Washington, the American general running the assault said there is no attempt to provide air cover for rebel operations. Gen. Carter Ham said Gadhafi might cling to power once the bombardment finishes, setting up a stalemate between his side and the rebels, with allied nations enforcing a no-fly zone to ensure he cannot attack civilians.

At the United Nations Monday, the Security Council turned down a request by Libya for an emergency session. Libya wanted "an emergency meeting in order to halt this aggression."

Henri Guaino, a top adviser to the French president, said the allied effort would last "a while yet."

Among the rebels, as well, there was a realization that fighting could be drawn out. Mohammed Abdul-Mullah, a 38-year-old civil engineer from Benghazi who was fighting with the rebel force, said government troops stopped all resistance after the international campaign began.

"The balance has changed a lot," he said. "But pro-Gadhafi forces are still strong. They are a professional military and they have good equipment. Ninety percent of us rebels are civilians, while Gadhafi's people are professional fighters."

Disorganization among the rebels could also hamper their attempts to exploit the turn of events. Since the uprising began, the opposition has been made up of disparate groups even as it took control of the entire east of the country.

Regular citizens — residents of the "liberated" areas — took up arms and formed a ragtag, highly enthusiastic but highly undisciplined force that in the past weeks has charged ahead to fight Gadhafi forces, only to be beaten back by superior firepower. Regular army units that joined the rebellion have proven stronger, more organized fighters, but only a few units have joined the battles while many have stayed behind as officers struggle to get together often antiquated, limited equipment and form a coordinated force.

Discord also plagued the coalition. The U.S. was eager to pass leadership off, but the allies were deeply divided on the issue. Turkey was adamantly against NATO taking charge, while Italy hinted Monday it would stop allowing use of its airfields if the veteran alliance is not given the leadership. Germany and Russia also criticized the way the mission is being carried out.

Russian Prime Minister Vladimir Putin railed against the U.N.-backed airstrikes as outside meddling "reminiscent of a medieval call for a Crusade."

in Libya, a "political leadership" has formed among the rebels, made up of former members of Gadhafi's regime who defected along with prominent local figures in the east, such as lawyers and doctors. The impromptu nature of their leadership has left some in the West — particularly in the United States — unclear on who the rebels are that the international campaign is protecting.

The disarray among the opposition was on display on Monday.

With Benghazi relieved, several hundred of the "citizen fighters" barreled to the west, vowing to break a siege on the city of Ajdabiya by Gadhafi forces, which have been pounding a rebel force holed up inside the city since before the allied air campaign began. The fighters pushed without resistance down the highway from Benghazi — littered with the burned out husks of Gadhafi's tanks and armored personnel carriers hit in the airstrikes — until they reached the outskirts of Ajdabiya.

Along the way, they swept into the nearby oil port of Zwitina, just northeast of Ajdabiya, which was also the scene of heavy fighting last week — though now had been abandoned by regime forces. There, a power station hit by shelling on Thursday was still burning, its blackened fuel tank crumpled, with flames and black smoke pouring out.

Some of the fighters, armed with assault rifles, grenade launchers and truck-mounted anti-aircraft guns, charged to the city outskirts and battled with Gadhafi forces in the morning. A number of rebels were killed before they were forced to pull back somewhat, said the spokesman for the rebels' organized military forces, Khalid al-Sayah.

Al-Sayah said the fighters' advance was spontaneous "as always." But the regular army units that have joined the rebellion are not yet ready to go on the offensive. "We don't want to advance without a plan," he told AP in Benghazi. "If it were up to the army, the advance today would not have happened."

He said the regular units intend to advance but not yet, saying it was not yet ready. "It's a new army, we're starting it from scratch."

By Monday afternoon, around 150 citizen-fighters were massed in a field of dunes several miles (kilometers) outside Ajdabiya. Some stood on the wind-swept dunes with binoculars to survey the positions of pro-Gadhafi forces sealing off the entrances of the city. Ajdabiya itself was visible, black smoke rising, apparently from fires burning from fighting in recent days.

"There are five Gadhafi tanks and eight rocket launchers behind those trees and lots of 4x4s," one rebel fighter, Fathi Obeidi, standing on a dune and pointing at a line of trees between his position and the city, told an Associated Press reporter at the scene.

Gadhafi forces have ringed the city's entrance and were battling with opposition fighters inside, rebels said. The plan is for the rebel forces from Benghazi "to pinch" the regime troops while "those inside will push out," Obeidi said. He said a special commando unit that defected to the opposition early on in the uprising was inside the city leading the defense.

Regime troops are also besieging a second city — Misrata, the last significant rebel-held territory in western Libya. According to reports from Al-Jazeera and Al-Arabiya, new fighting erupted Monday at Misrata, Libya's third largest city, which the forces have shelled repeatedly over recent days while cutting off most food and water supplies to residents.

So far, allied bombardment has concentrated on knocking out Libyan air defenses, but a significant test of international intentions will be whether eventually the strikes by ship-fired cruise missiles and warplanes will try to break the sieges of Ajdabiya and Misrata by targeting the Gadhafi troops surrounding them.

Al-Sayah said there had been allied strikes against Gadhafi positions outside Ajdabiya early Monday, but there was no independent confirmation, and the troops were still in place Monday afternoon.

Ali Zeidan, an envoy to Europe from the opposition-created governing council, told The Associated Press that rebels want to drive Gadhafi from power and see him tried — not have him killed. He said that while airstrikes have helped, the opposition needs more weapons to win the fight.

"We are able to deal with Gadhafi's forces by ourselves" as long as it's a fair fight, he said in Paris. "You see, Gadhafi himself, we are able to target him, and we would like to have him alive to face the international or the Libyan court for his crime .... We don't like to kill anybody ... even Gadhafi himself."

At the Pentagon, Ham said Monday afternoon that during the previous 24 hours, U.S. and British forces launched 12 Tomahawk land attack missiles, targeting regime command-and-control facilities and a missile facility and attacking one air defense site that already had been attacked.

"Through a variety of reports, we know that regime ground forces that were in the vicinity of Benghazi now possess little will or capability to resume offensive operations," he said.

A spokesman for the French military, whose warplanes have been conducting strikes in the Benghazi region, said there is a "very clear scale-down in the intensity of combat and, therefore, threats to the population" because of the bombardment.

"There still are pro-Gadhafi elements in the zone where we're working. Nevertheless, these elements haven't necessarily been dealt with because they are mixed in, for example with the civilian population," Thierry Burkhard said.