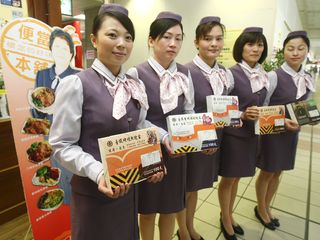 The Taiwan Railway Administration (TRA) unveiled a new boxed lunch yesterday that it touted as healthier and endorsed by nutrition experts.

The boxed lunches, featuring low-fat, low sodium ingredients, are the brainchild of the TRA and dieticians, said Dennis Ju, director of the TRA's catering service department.

The amount of calories in each of the boxed lunches ranges from 702 to 712, compared with 900-1,000 calories in other boxed lunches on the market, said Tsai Yi-hsien, director of the hospital's department of dietetics.

The new boxed lunches, priced at NT$100 (US$3.3), are made by the TRA under the supervision of the hospital, Tsai added.

Opening a chicken boxed lunch at the Taipei Railway Station, Lin Hui-huang noted that "now it has much more side dishes. The old ones do not feel healthy, with only a soy sauce egg and some pickles."

Because of the complexity in the production, however, only 150 of the new boxes were offered at each station, said a staffer, who added that her station alone sells about 1,000 boxed lunches per day.