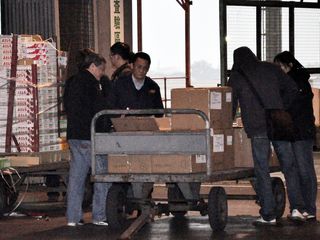 The Atomic Energy Council (AEC) said yesterday it is working on new radiation inspection standards for industrial goods imported from Japan in the wake of radiation leaks from one of the tsunami-ravaged country's nuclear power plants.

The AEC was working with the Bureau of Standards, Metrology & Inspection (BSMI) to set the standards as part of a wider effort to monitor potential radiation contamination from Japan, said Liu Wen-shi, deputy director of AEC's department of radiation protection.

"The new monitoring will cover goods from a variety of industrial sectors, including chemicals, machinery and electronics, as well as household goods, " Liu told a media briefing.

"We plan to set up different standards for these products based on their classification."

Liu said the AEC would expedite its procedures for the expanded radiation monitoring program to minimize its impact on businesses in those sectors. More details are expected to be announced as early as Tuesday, he added.

Radiation concerns have mounted since the Fukushima Daiichi nuclear plant about 240 kilometers north of Tokyo was disabled by a horrific earthquake and tsunami on March 11.

Despite workers' efforts to prevent a meltdown at the facility, the plant has spewed radiation into the atmosphere, and Japanese authorities are now finding radioactive particles in some of the country's produce, some of which is exported to Taiwan.

On March 19, Taiwan found small amounts of radioactive substances in a 14-kilogram shipment of fava beans from Japan, and Liu said the importer has agreed to destroy it to prevent the beans from reaching food processors or consumers.

Meanwhile, checks of travelers at major international gateways continued Monday, with 30,350 people checked as of 11 a.m. since the program began last Thursday.

Of those, low levels of radiation were detected on 39 people, but the concentrations were not high enough to pose a health risk, the AEC said.

The council also checked 588 tourists on a cruise line that arrived in Taiwan from Naha in Okinawa, southern Japan, on Monday morning. No radiation was detected, according to the AEC.