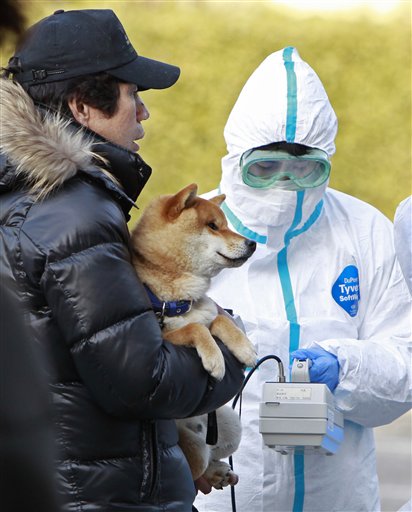 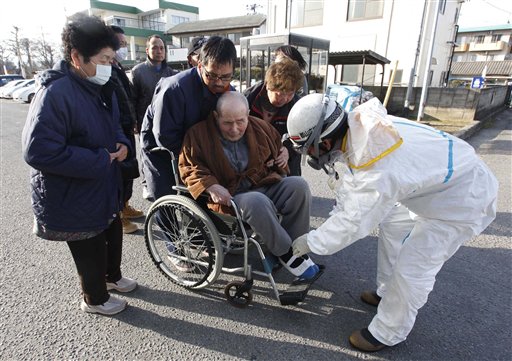 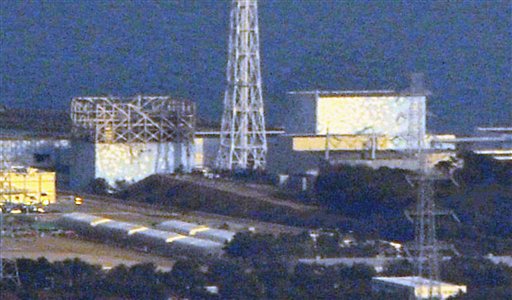 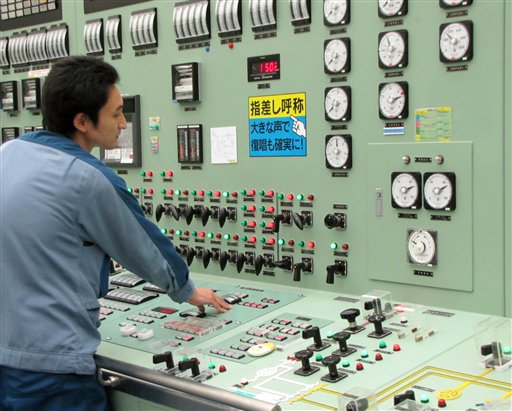 Water levels dropped precipitously yesterday inside a Japanese nuclear reactor, twice leaving the uranium fuel rods completely exposed and raising the threat of a meltdown, hours after a hydrogen explosion tore through the building housing a different reactor.

Water levels were restored after the first decrease, but the rods remained partially exposed late Monday night, increasing the risk of the spread of radiation and the potential for an eventual meltdown.

The cascading troubles in the Fukushima Dai-ichi plant compounded the immense challenges faced by the Tokyo government, already struggling to send relief to hundreds of thousands of people along the country's quake- and tsunami-ravaged coast where at least 10,000 people are believed to have died.

Later, a top Japanese official said the fuel rods in all three of the most troubled nuclear reactors appeared to be melting.

Of all these troubles, the drop in water levels at Unit 2 had officials the most worried.

"Units 1 and 3 are at least somewhat stabilized for the time being," said Nuclear and Industrial Agency official Ryohei Shiomi "Unit 2 now requires all our effort and attention."

Workers managed to raise water levels after the second drop Monday night, but they began falling for a third time, according to nuclear agency official Naoki Kumagai. They are now considering spraying water directly on container to cool it.

In some ways, the explosion at Unit 3 was not as dire as it might seem.

The blast actually lessened pressure building inside the troubled reactor, and officials said the all-important containment shell — thick concrete armor around the reactor — had not been damaged. In addition, officials said radiation levels remained within legal limits, though anyone left within 12 miles (20 kilometers) of the scene was ordered to remain indoors.

Fukushima prefectural officials said, however, that 190 people have been exposed to some radiation from the plant. Nuclear safety officials said monitoring devices around the plant briefly showed radiation levels six times the legal limit, but they have since gone down.

On Saturday, a similar hydrogen blast destroyed the housing around the complex's Unit 1 reactor, leaving the shell intact but resulting in the mass evacuation of more than 185,000 people from the area.

Officials were clearly struggling to keep ahead of the crisis and prevent a worst case scenario: a complete reactor meltdown.

In that case, the uranium core melts through the outer containment shell, releasing a wave of radiation and resulting in major, widespread health problems.

Late Monday, the chief government spokesman said there were signs that the fuel rods were melting in all three reactors, all of which had lost their cooling systems in the wake of Friday's massive earthquake and tsunami

Some experts would consider that a partial meltdown. Others, though, reserve that term for times when nuclear fuel melts through a reactor's innermost chamber but not through the outer containment shell.

Officials held out the possibility that, too, may be happening.

"It's impossible to say whether there has or has not been damage" to the vessels, Kumagai, the nuclear agency official, said.

The Monday morning explosion at the Fukushima Dai-ichi plant's Unit 3 injured 11 workers and came as authorities were trying to use sea water to cool the complex's three reactors.

While four Japanese nuclear complexes were damaged in the wake of Friday's twin disasters, the Dai-ichi complex, which sits just off the Pacific coast and was badly hammered by the tsunami, has been the focus of most of the worries over Japan's deepening nuclear crisis. All three of the operational reactors at the complex now have faced severe troubles.

Operators knew the sea water flooding would cause a pressure buildup in the reactor containment vessels — and potentially lead to an explosion — but felt they had no choice if they wanted to avoid complete meltdowns. Eventually, hydrogen in the released steam mixed with oxygen in the atmosphere and set off the two blasts.

Japan's meteorological agency did report one good sign. It said the prevailing wind in the area of the stricken plant was heading east into the Pacific, which experts said would help carry away any radiation.

Across the region, though, many residents expressed fear over the situation.

People in the port town of Soma had rushed to higher ground after a tsunami warning Monday — a warning that turned out to be false alarm — and then felt the earth shake from the explosion at the Fukushima reactor 25 miles (40 kilometers) away. Authorities there ordered everyone to go indoors to guard against possible radiation contamination.

"It's like a horror movie," said 49-year-old Kyoko Nambu as she stood on a hillside overlooking her ruined hometown. "Our house is gone and now they are telling us to stay indoors.

"We can see the damage to our houses, but radiation? ... We have no idea what is happening. I am so scared."

Meanwhile, 17 U.S. military personnel involved in helicopter relief missions were found to have been exposed to low levels of radiation after the flew back from the devastated coast to the USS Ronald Reagan, an aircraft carrier about 100 miles (160 kilometers) offshore.

U.S. officials said the exposure level was roughly equal to one month's normal exposure to natural background radiation, and the 17 were declared contamination-free after scrubbing with soap and water.

As a precaution, the U.S. said the carrier and other 7th Fleet ships involved in relief efforts had shifted to another area.

While Japan has aggressively prepared for years for major earthquakes, reinforcing buildings and running drills, the impact of the tsunami — which came so quickly that not many people managed to flee to higher ground — was immense.

By Monday, officials were overwhelmed by the scale of the crisis, with millions of people facing a fourth night without electricity, water, food or heat in near-freezing temperatures.

International scientists say there are serious dangers but little risk of a catastrophe like the 1986 blast in Chernobyl, where there was no containment shells.

And, some analysts noted, the length of time since the nuclear crisis began indicates that the chemical reactions inside the reactor were not moving quickly toward a complete meltdown.

"We're now into the fourth day. Whatever is happening in that core is taking a long time to unfold," said Mark Hibbs, a senior associate at the nuclear policy program for the Carnegie Endowment for International Peace. "They've succeeded in prolonging the timeline of the accident sequence."

He noted, though, that Japanese officials appeared unable to figure out what was going on deep inside the reactor. In part, that was probably because of the damage done to the facility by the tsunami.

"The real question mark is what's going on inside the core," he said.

Overall, more than 1,500 people had been scanned for radiation exposure in the area, officials said.