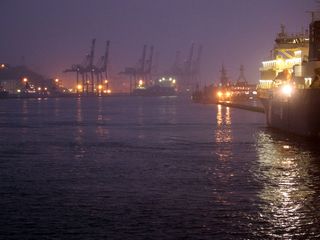 Taiwan was unaffected by a tsunami triggered by a magnitude 8.9 earthquake off Japan's coast yesterday, and offered US$300,000 in aid to its stricken neighbor.

Although it was feared that the tsunami might cause damage to Taiwan's eastern coastline, Transportation and Communications Minister Mao Chi-kuo reported that the waves hitting Taiwan's shores were only 10 centimeters higher than on average.

Taiwan's business sector, however, is likely to feel the ripple effect of the powerful temblor in the coming days, with some companies benefiting and others suffering disruptions.

The Taiwan External Trade Development Council (TAITRA) predicted that with Japan's semiconductor industry expected to be the hardest hit by the disaster, Taiwan's semiconductor, LED, flat panel and petrochemical sectors may benefit in the short term as Japan's customers shift orders to Taiwan to bridge supply shortfalls.

Taiwan's electronics and telecommunications companies could be adversely affected, however, because of a possible shortage of materials and components sourced from Japan, the TAITRA said.

Shortly after the earthquake hit off of Japan's eastern coast early Friday afternoon, tsunami warnings were issued for Taiwan and the central and local governments swiftly set up quick response centers to deal with the potential threat.

Schools and offices were closed Friday afternoon in Keelung City and Yilan, Hualien, and Taitung counties in northern and eastern Taiwan bordering the Pacific Ocean.

President Ma Ying-jeou personally monitored operations at the national emergency center and offered to send a rescue team to Japan.

But once the threat from the tsunami had passed, the Central Weather Bureau lifted its tsunami warning at 6: 40 p.m. and the Central Emergency Operation Center lifted its Level 1 alert 20 minutes later.

Mao said no casualties were reported from Keelung City and Yilan, Hualien and Taitung counties and that some sections of the roadway along Taiwan's eastern coast were reopened at 6: 30 p.m. after being temporarily closed.

As for Taiwanese traveling in Japan, Mao said 1,024 Taiwanese tourists traveling as part of 37 tour groups were safe.

Reports of casualties from the disaster were slow to emerge, but Kyodo News reported Friday evening that up to 300 bodies were found in Sendai in Miyagi Prefecture in northeastern Honshu.

The earthquake, the biggest in Japan in 140 years, rattled Amori, Iwate, Fukushima and Miyagi prefectures, but the worst damage was likely caused by two tsunamis that swept away everything in their paths as they plowed inland near Sendai.

Taiwan's airlines said flights between the two countries will continue to be affected in the coming days. On Friday, some flights to and from Japan were canceled, delayed or forced to land at airports in a third country or area.

EVA Airways, Taiwan's second-largest carrier, announced that flights to and from Sendai on March 13 have been canceled.

EVA Air operates two weekly flights to Sendai, a destination the airline has served for many years.