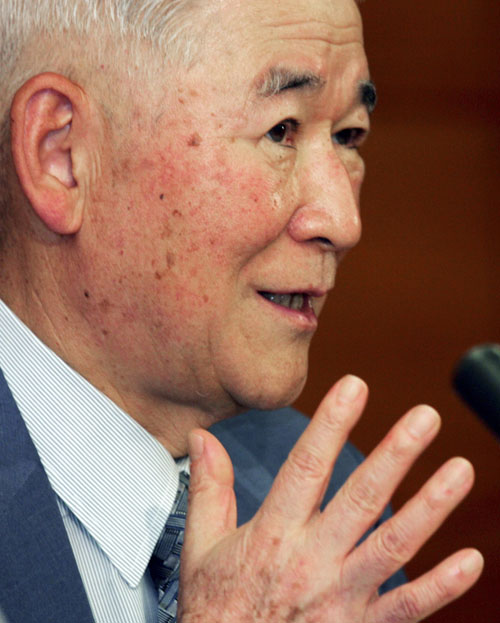 The Bank of Japan has no predetermined time for raising interest rates, central bank Governor Toshihiko Fukui said yesterday.
"While we don't rule out the possibility of an additional rate increase this year, that doesn't suggest that we will raise rates" again in 2006, Fukui said at a news briefing in Tokyo. "Our rate policy is extremely open and we don't have any preconceived notion" about the timing of a rate increase.
The central bank's policy board voted unanimously to keep the key interbank overnight lending rate at 0.25 percent at the end of a two-day meeting earlier today. The bank raised the key rate last month from near zero percent, its first rate increase in almost six years.
Fukui reiterated that interest rates will stay at very low levels for some time and adjustments will be "gradual." The timing of further rate adjustments depends on developments in prices and the economy, he said.
Japan's economic growth slowed to a 0.8 percent pace in the second quarter, the Cabinet Office said today, as companies depleted stockpiles to satisfy accelerating consumer and business spending. Expansion was slower than the 2 percent median forecast of 32 economists surveyed by Bloomberg News.
Two members of the policy board, Miyako Suda and Atsushi Mizuno, have said since the July rate increase that the chance of raising borrowing costs again this year shouldn't be ruled out.
Fukui said the policy makers made the comments because they might have been concerned his remark last month that the bank won't raise rates "consecutively" could have been interpreted as ruling out further rate increases in 2006.
The Japanese economy has so far moved in line with the prediction the bank made in its semi-annual economic report released in April, Fukui said. The bank will push for interest-rate adjustments at a gradual pace if the economy keeps growing as it forecast, the governor said.
Gross domestic product figures for the second quarter confirm the economy is growing, buoyed by steady capital investment and consumer spending, he said. Business investment has been stronger than the bank predicted in April, though it hasn't become excessive, he added.
Fukui also said the U.S. Federal Reserve may resume raising interest rates even as growth slows, given that inflationary pressure remains in the world's largest economy. The Fed kept the benchmark rate at 5.25 percent this week, ending a record two-year run of increases.
"Inflationary risks remain in the U.S. economy," Fukui said. "We believe they are leaving open the possibility for further rate increases rather than sending the signal that they have finished raising rates."
Fukui added that the bank will keep a close watch on developments in the U.S. economy, which is "one topic of significant interest when determining the outlook of the Japanese economy."