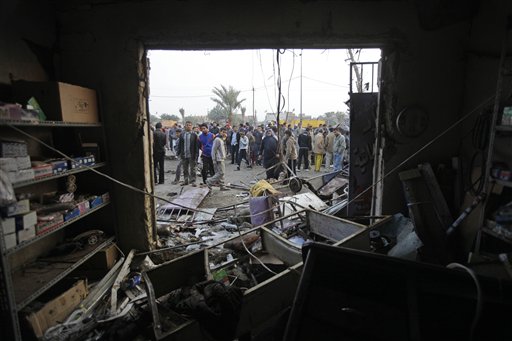 A car bomb ripped through a funeral tent in a mainly Shiite area of Baghdad on Thursday, killing at least 48 people and triggering skirmishes between Iraqi troops and demonstrators angry about security failures.

The blast and three other small bombings Thursday were the latest in more than a week of attacks that have killed more than 200 people, raising fears about an uptick in violence as the U.S. military prepares to withdraw from the country.

The violence has mainly targeted the majority Shiite community and Iraqi security forces, posing a major challenge to Prime Minister Nouri al-Maliki and his fragile coalition government that was seated last month.

Baghdad has touted security improvements in its campaign to host an Arab League summit in March as it tries to mend frayed ties with its Arab neighbors, many of whom fear growing Iranian influence in Iraq. Iraqi officials insisted the two-day meeting would not be derailed.

"The terrorists are carrying out these bombings now because they are angry over the successful formation of a new government and they want to try to foil the Arab Summit," said Kamil Nassir al-Zaidi, the head of the Baghdad provincial council. "But the summit will be held as scheduled despite all these bombings."

The car that exploded about 2 p.m. Thursday in the Shula neighborhood had been parked with the vehicles of mourners near the funeral tent so it wouldn't raise suspicion, police said. Several other cars were set ablaze and nearby houses were damaged.

It was so close that a charred piece of the engine was tossed to the edge of the long tent that had been set up for the elderly Shiite tribal sheik who had died.

At least 48 people were killed and 121 wounded, according to police and hospital officials, who spoke on condition of anonymity because they weren't authorized to release the information.

Young men furious over the lack of security began pelting Iraqi security forces at the scene with stones.

Anger was still high three hours later, and Iraqi troops fired in the air to disperse a crowd of residents gathering elsewhere in the neighborhood for a demonstration against the failure to prevent the bombings. Police said some in the crowd fired back as Iraqi helicopters buzzed overhead.

A witness who identified himself as Abu Ahmed al-Saiedi said mourners had been allowed to park near the funeral tent because most people in the neighborhood knew each other.

"I blame the neighborhood security officials for letting this car bomb enter the area without being checked," said al-Saiedi, who was hit in the arm with shrapnel. "When I saw people hurling stones at security men, I said to myself, 'They deserve that.'"

Ali Kamil, a 22-year-old college student who lives nearby, said he rushed to the scene and found that two of his friends had been killed and four others wounded.

The first roadside bomb occurred about 8:30 a.m. near a police patrol at a commercial complex in Baghdad's Karradah neighborhood, killing one civilian and wounding five other people, including three policemen, officials said.

A bomb targeting Iraqi soldiers patrolling the Bab al-Muadham area of Baghdad exploded about an hour and a half later, killing one bystander and wounding three others, according to police and hospital officials.

One of his guards was killed and two others were wounded in the blast, which occurred just about 100 yards (meters) away from his office.

The officials all spoke on condition of anonymity because they weren't authorized to release the information.

Violence has declined sharply in Iraq over the past few years, but near-daily attacks continue.

The current wave of attacks began Jan. 18 with a suicide bombing that killed 65 police recruits in Saddam Hussein's hometown of Tikrit, followed by two blasts on subsequent days against two security force headquarters in Baqouba that killed a total of 10 people.

The Islamic State of Iraq, an al-Qaida front group, claimed responsibility for the three attacks north of Baghdad.

Separate car bombings targeting Shiite pilgrims mourning the death of one of their most beloved saints also killed 82 people, while 22 others were killed in sporadic violence elsewhere.

The persistent bloodshed comes as al-Maliki must soon face the question of whether to ask U.S. forces to stay after the end of the year.

In his State of the Union address Tuesday, President Barack Obama appeared to close the door on keeping any significant U.S. military presence in Iraq beyond that deadline.

"This year, our civilians will forge a lasting partnership with the Iraqi people while we finish the job of bringing our troops out of Iraq," Obama said.