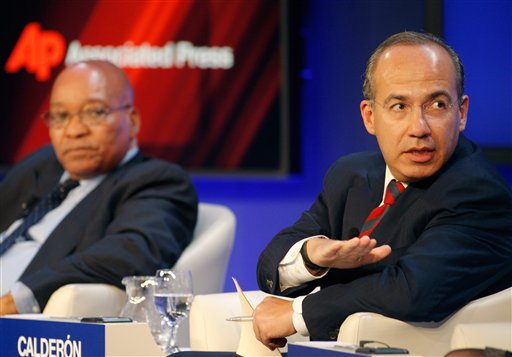 U.S. businesses must do more to pressure Congress to act on climate change and realize that China is "winning the green race," world leaders and climate change experts said yesterday at the World Economic Forum.

In a panel discussion at Davos, where some 2,500 business leaders and politicans are gathered, U.N. climate chief Christiana Figueres said China "is going to leave us all in the dust" in the transition toward a more energy-efficient global economy.

The Chinese, she said, "are not doing it just because they want to save the planet. They are doing it because it's good for the economy."

European Union Climate Commissioner Connie Hedegaard said it's time that American businesses realize that "it's bad business to not be among the front-runners" in that race.

There is serious concern about how to keep the global economy moving forward while, at the same time, ensuring that people in the developing world are not denied a chance to better their lives without contributing to factors that have caused global warming.

"The solutions have to come from business. They will have to come up with alternative ways of doing things," she said, sharing the stage with Mexico President Felipe Calderon and South African President Jacob G. Zuma.

"That is why setting the political targets are so crucial, because then we can set a price on carbon," she said. "If it costs a lot to pollute a lot, then business has an incentive to pollute less."

The discussion comes after global talks on a new climate pact escaped failure last month in the Mexican resort town of Cancun, where nations agreed on a modest set of decisions that put climate change negotiations back on track after the bitterly divisive summit in 2009 in Copenhagen.

The Copenhagen talks exposed the rift between rich and poor nations on the fundamental question of how to share the responsibility of tackling climate change — chiefly curbing the emissions of heat-trapping gases from the burning of fossil fuels.

Copenhagen produced only a nonbinding accord with voluntary climate targets to cut greenhouse gas emissions that wasn't even formally adopted by the conference.

At Cancun, nations brought those voluntary pledges into the U.N. negotiating process and established a green fund to manage the $100 billion a year by 2020 that developed countries have pledged to help poor nations cope with global warming.