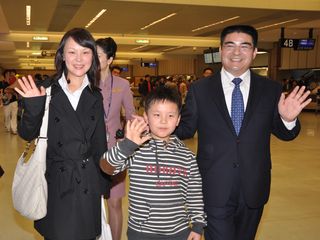 China's top philanthropist donated NT$6.7 million (US$227,118) to disadvantaged residents in northern Taiwan's Hsinchu County yesterday on the first leg of a heavily publicized philanthropic tour of the country.

"The Hsinchu charity event is just a start, " said Chen Guangbiao at a donation ceremony held at the Hsinchu county government's auditorium. "I look forward to making a similar visit to Taiwan every year, " he added.

Chen, who made his fortune recycling construction materials, is well-known in China for his flamboyant style of charity work.

Instead of giving out cash personally to each of the needy families, which is his usual modus operandi in China, Chen first handed a symbolic NT$4 million check to Ku Su-chen, president of the federation of women's associations in the county.

Federation staff then distributed cash-stuffed red envelopes to 315 people from low-income families, each of whom received NT$10,000.

Although some people criticize his ostentatious methods, Chen said he does not care.

"I take pleasure in carrying out acts of charity and I hope my actions can inspire more people to follow suit, " the 43-year-old tycoon said.

Earlier in the day, he gave away three red envelopes containing a total of NT$70,000 to a Taiwanese woman as he was leaving his hotel for a visit to the National Palace Museum in suburban Taipei.

The woman in her 60s had been waiting for him since Wednesday night. She told Chen she had no regular income and had to care for her 88-year-old mother. Chen immediately gave her three red envelopes. The woman burst into tears as she clutched the envelopes, saying she had never had such a large sum of money at one time.

He is scheduled to make a similar cash-dispensing trip to the central county of Nantou Jan. 29.

Some Taiwanese county governments and opposition party officials have voiced opposition to his donation plans in Taiwan, raising concerns that his high-profile donation manner might hurt the recipients' feelings or dignity.

Feelings on the issue were running so high that a clash erupted between Chen's supporters and opponents at the Taiwan Taoyuan International Airport after his arrival late the previous day in the company of his wife, 9-year-old son and dozens of Chinese businessmen and journalists.