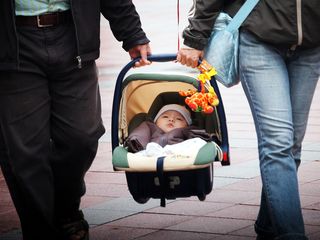 The Ministry of the Interior (MOI) is mulling whether to subsidize children aged 0-2 at between NT$3,000 and NT$5,000 each per month, with children from well-to-do families excluded from the program, an official said yesterday.

Chang Shiu-yuan, director of the ministry's Child Welfare Bureau, said the proposed project has been sent to the Council for Economic Planning and Development, the nation's highest economic planning agency, for deliberation.

The ministry will also report to President Ma Ying-jeou and Premier Wu Den-yih on the project, Chang said.

She estimated that the annual required fund for such subsidies will be NT$8.3 billion based on the calculation of 190,000 new births every year, with around 80,000 people set to benefit from the subsidies.

The ministry's plan comes against the background of Ma's recent calls for efforts to boost the declining birth rate as one of the nation's top priorities.