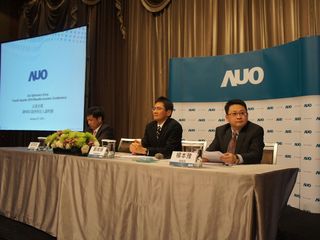 AU Optronics Corp. (AUO) , Taiwan's second-largest flat-screen maker, expects its large panel shipments to be flat or just slightly down in the first quarter of this year due to healthy inventories of retail channels and a rebound in the selling price of TV panels, the company said yesterday.

AUO's forecast for its large panel shipments in the first three months of the year, traditionally the slowest quarter for sales, can also be attributed to the emerging effect of alliances it forged with clients in 2010, AUO Chief Financial Executive Andy Yang said at a company investor conference.

However, AUO's small and medium-sized panel shipments are expected to decrease by a single digit percentage from the previous quarter because of the seasonal effect, Yang said.

AUO posted consolidated revenue of NT$102.6 billion (US$3.52 billion) in the fourth quarter of 2010, down 17.5 percent from the previous quarter. It also reported a gross profit of minus NT$4.54 billion, with a gross margin of minus 4.4 percent.

"Owing to the lower-than-expected TV panel prices, inventory control by customers, and the currency influence of the New Taiwan dollar's appreciation, AUO's operating performance in the fourth quarter of 2010 fell short of expectations, " Yang said.

"Fortunately, the company maintained profitability throughout the whole year."

Shipments of AUO's large panels exceeded 113.5 million units last year, up 26.7 percent from the previous year, while shipments of small and medium-sized panels reached around 220.9 million units, a year-on-year drop of 3.4 percent.

Asked about the company's outlook for the whole of 2011, Paul Peng, executive vice president of AUO's global business unit, said AUO expects its smartphone panel shipments to account for 30 percent to 40 percent of total shipments this year, compared with 20 percent in 2010.

The company's shipments for notebook computer panels -- including regular notebooks, netbooks and tablets -- will grow about 30 percent to 278 million units this year on the back of a boost in demand for tablet devices, Peng said.