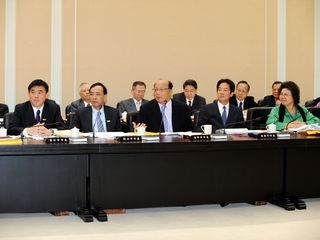 The newly elected mayors of Taiwan's five special municipalities said at a Cabinet meeting yesterday they are worried about the fact that their cities are burdened with a total debt of NT$769.3 billion (US$25.7 billion).

The mayors of Taipei, Xinbei, Taichung, Tainan and Kaohsiung attended a Cabinet meeting for the first time since they were sworn in on Dec. 25.

According to Cabinet spokesman Johnny Chi-chen Chiang, Taichung Mayor Jason Hu and the others expressed concern over the progress of the amendments to the Public Debt Act and the Act Governing the Allocation of Government Revenues and Expenditures.

Eric Liluan Chu, mayor of Xinbei City, was concerned about the source of funding for economic development next year, and expressed the hope that the central government would work with the new mayors to help attract investment, Chiang said.

Kaohsiung Mayor Chen Chu asked how the government could help her source the NT$260 billion required for a major development project in her city called the Southern Taiwan Joint Services Center, Chiang reported.

Responding to these and other requests, Premier Wu Den-yih asked his staff to come up with provisional measures to help the cities tide over their financial difficulties during the transitional period, Chiang said.

Wu said it is apparent that the amendments to the two laws could not be completed this year, and he must take into consideration the concerns of the other 17 county magistrates and city mayors who were not present at Thursday's meeting.

He assured the five mayors that the Cabinet, in cooperation with the local governments, will find a way to fairly allocate government revenues.

Christina Liu, minister of the Council for Economic Planning and Development, said her council will work with the five municipalities to devise strategies for attracting investment, based on regional features.

"A regional brand will be designed first, then efforts will be made to market the product globally, " she said. She also quoted Public Construction Minister Fan Liang-shiow as reporting that more than NT$200 billion in private investment has been thrown into public construction projects this year.

Liu said she would ask her staff to provide Chen Chu with a list of investment funds available for the Southern Taiwan Joint Services Center.