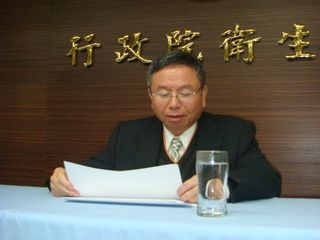 The Department of Health (DOH) unveiled three formulas yesterday for calculating national health insurance premiums based on a revised package proposed by the ruling Kuomintang (KMT) , all of which allow for lower premium rates in the initial stage.

DOH Minister Yaung Chih-liang said all three versions were formulated on the basis of KMT-initiated revisions to the existing National Health Insurance (NHI) Act, which suggest differentiating the premium rates on the regular salaries of the insured and four additional types of income.

The first version proposes that the premium rate be set at 5 percent of the insured's regular salary in the first five years of its implementation, with the government contributing at least 36 percent of the coverage amount. The current premium rate is 5.1 7 percent.

This version also calls for an additional NT$20 billion in "supplement premiums" to be levied from four other types of income -- interest income, stock dividends, professional practice income and any cash awards that are four times more than a person's monthly salary. The premium rate for the "supplement premiums" is tentatively set at 2 percent.

According to the DOH's estimate, this version would allow the NHI system to remain solvent for five years, with at least a one-month reserve.

As the existing NHI Act caps the premium rate at 6 percent, the law would have to be revised by then, Yaung said.

Although the DOH has proposed two other premium collection formulas, the minister said, the first version is most preferable in terms of "professionalism."

The second version does not require raising a monthly reserve fund, which would allow the 5 percent premium rate to remain unchanged in the first six years until 2017. But the rate would be raised to 5.09 percent in 2018 and would also exceed the 6 percent ceiling to hit 6.1 percent in 2021.

The differences in the three versions mainly lie in whether the NHI system should raise reserve funds as a hedge against financial instability, Yaung said.

Legislative Yuan Speaker Wang Jin-pyng said earlier in the day that the legislature will deal with issues surrounding the NHI Act Jan. 4, with the KMT-proposed revisions as the basis.

Given the lack of consensus between the ruling and opposition parties on 28 to 29 articles of the draft package, a showdown vote could be inevitable, Wang said.

"Legislative caucus whips from both the KMT and the opposition Democratic Progressive Party will be allowed to air their views and positions in the Jan. 4 legislative session before a vote on the package is held," he added.