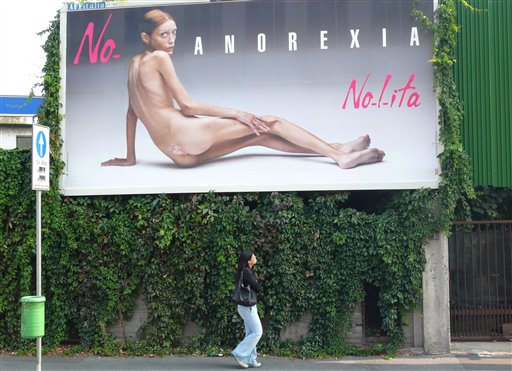 Isabelle Caro, a French actress and model whose emaciated image in a shock Italian ad campaign helped rivet global attention on the problem of anorexia in the fashion world and beyond, has died at the age of 28.

Caro had said she began suffering from anorexia when she was 13, and she weighed about 59 pounds (27 kilograms) when the photos that made her famous were taken.

After a 21-year-old Brazilian model died from the eating disorder, Italian photographer Oliviero Toscani produced a 2007 campaign for an Italian fashion house that plastered newspapers and billboards with a naked picture of a spectral Caro looking over her shoulder at the camera, vertebrae and facial bones protruding under the slogan "No Anorexia."

The campaign gained Caro widespread attention in media in countries around Europe and in the United States, and she spoke out often about her anorexia and her efforts to recover, and the menace of eating disorders on the fashion industry.

Caro's longtime acting instructor, Daniele Dubreuil-Prevot, told the AP on Wednesday that Caro died on Nov. 17 after returning to France from a job in Tokyo.

Dubreuil-Prevot said she did not know the cause of death but that Caro "had been sick for a long time" and spent years in and out of hospitals. Her death and her illness "are an absolute waste," the acting teacher said.

Caro wrote a book published in France in 2008 titled "The Little Girl Who Didn't Want to Get Fat," served as a member of the jury on Top Model France, and worked periodically as a film and television actress. In one appearance, she was interviewed by Jessica Simpson for the VH1 show "The Price of Beauty."

In one online video, Caro ends with words of advice for aspiring models: "Believe in life."

Her agent, Sylvie Fabregon, told The Associated Press that the Italian campaign was intended "to show what it is like to be anorexic."

Some groups working with anorexics warned, however, that the attention paid to Caro did a disservice to others afflicted with the disorder.

Images of Caro appeared on so-called pro-ana, or pro-anorexia websites. On Wednesday, one posted a notice about her death and a photo of her, large blue-green eyes peering over a child-size upper arm, with the caption, "die young, stay pretty."

However, concern over anorexia has not been matched by deeds.

The 2006 anorexia-linked death of the Brazilian model prompted efforts throughout the international fashion industry to address the health repercussions of using ultra-thin models — but no binding measures.

French fashion industry representatives signed a government-backed charter in 2008 pledging not to encourage eating disorders and to promote healthy body images by promoting "a diversity of body representations" and not showing "images of people that could help promote a model of extreme thinness."

But London Fashion Week organizers dropped plans in 2008 for something more concrete, international health certificates for models, because industry executives around the world refused to cooperate.

In France, a bill that would have cracked down on websites that advise anorexics how to starve was passed by parliament's lower house but never considered in the Senate.

Swiss singer Vincent Bigler and Caro had been working on a video for a song he wrote about anorexia called "J'ai fin," a wordplay in French that means roughly "I am the end" but is pronounced identically to "I am hungry."

Bigler said he penned the song after being so moved and worried by seeing Caro on television, and meant the lyrics to focus on hope and healing.

Caro "left me with many images, and much hope," he said by telephone, describing her different moods and ideas as they worked on the project together.

Caro's Facebook page, which quickly filled with condolences in several languages, says she was born Sept. 12, 1982. She took violin lessons and then acting lessons in Nantes and Versailles, according to Dubreuil-Prevot.

Caro's father alerted a few close friends at the time of her death, and a funeral service was held in Paris, according to Dubreuil-Prevot. Her family could not be reached for comment.