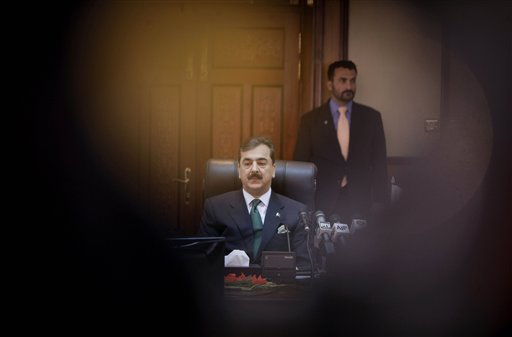 Pakistan's U.S.-allied ruling party scrambled yesterday to keep its fragile coalition government in power as its senior leaders met with two dissident political partners, urging them to rejoin the Cabinet.

A leader of one of the disgruntled parties, however, reiterated demands that the prime minister quit or be fired.

The political turmoil threatens to distract Pakistani lawmakers from tackling the nation's serious challenges, including a struggling economy and an Islamist insurgency that is also affecting a U.S.-led war in neighboring Afghanistan.

The Pakistan People's Party-led government faces a crisis with the secular Muttahida Qaumi Movement party quitting its two cabinet posts but remaining in the ruling coalition for now, while the Islamist Jamiat Ulema Islam party said it would defect to the opposition benches.

If the MQM decides to follow the JUI into the opposition, it could cost Prime Minister Yousuf Raza Gilani the parliamentary majority he needs to continue his almost three-year-old government.

In an effort to forestall a possible collapse, Interior Minister Rehman Malik, a senior lawmaker and envoy of President Asif Ali Zardari, held crisis meetings with MQM and JUI leaders overnight Wednesday, urging them to support an increasingly unpopular government and to remain part of the policymaking cabinet.

Information Minister Qamar Zaman Kaira said Wednesday the PPP was close to resolving its differences with both junior coalition partners.

"We will give you good news soon," Kaira told The Associated Press.

He also extended an olive branch to MQM, saying: "we promise that we will address their genuine concerns."

Kaira did not elaborate on those concerns, although MQM chief Altaf Hussain has publicly complained that the PPP has failed to consult on major policy decisions and has failed to curb corruption, which is endemic in Pakistan's public and private sectors.

JUI leader Maulana Fazlur Rehman's aide, Hafiz Hussain Ahmad, however, said their party would only return to the government if Zardari sacked Gilani, explaining that the premier must be punished for stirring up tensions when he dumped a JUI lawmaker from his Cabinet.

The JUI has refused an offer to nominate a replacement minister from its ranks.

"We will only consider working with the ruling party if President Asif Ali Zardari sacks Gilani," Ahmad said Wednesday following Rehman's meeting with Malik in the capital Islamabad.

Kaira suggested that Gilani's leadership remained solid, saying he had been elected prime minister in 2008 unopposed by any challenger.

Kaira also suggested that JUI did not want to force an early election by bringing down the government, saying the party would not take a decision that harmed democracy. Pakistan's parliaments have rarely last a full five-year term.

Neither Malik nor an MQM spokesman was immediately available for comment on Wednesday.

Keeping nuclear-armed Pakistan stable is a major concern for Washington, which is already unhappy with militants' ability to use the country's rugged tribal regions as safe havens from where they can plan attacks on Western troops in Afghanistan.

Pakistan has launched multiple army operations against militant groups who launch attacks on its soil, but, to the Americans' chagrin, it has held off on going after insurgents whose primary focus is fighting in Afghanistan.

On Wednesday, Pakistani army helicopters targeted militant positions in a remote area of the northwestern tribal region of Kurram, killing eight militants and wounding some others, said Asad Khan, a government administrator.

Elsewhere in the tribal belt, gunmen opened fire on a trailer believed to be carrying supplies for NATO troops across the border in Afghanistan. The driver died during the attack in the Khyber tribal region, said Iqbal Khan, a government official in the area.