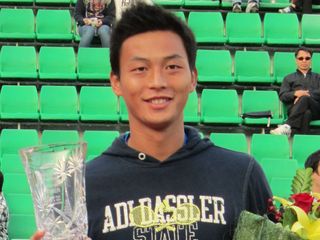 Lu Yen-hsun, widely regarded as the most outstanding male player in Taiwan tennis history, has been selected as the country's 2010 "Man of the Year," according to a poll that was made public yesterday.

Lu, 27, won the title with 60 percent support among the respondents in the survey conducted by the 104 job bank.

In a press release issued late Wednesday, Lu said his selection as Man of the Year was an unexpected honor.

According to 80 percent of the respondents in the poll, Lu's success was linked to his determination to fight to the end, rather than the achievement of fame or fortune.

Lu, who is preparing for the 2011 Australia Open, has performed outstandingly this year. In June, he reached the quarterfinals at Wimbledon by beating American tennis player Andy Roddick. With that win, Lu became the first Taiwanese male player to reach the quarter-finals of a Grand Slam and the first Asian to compete in a major since 1995.

Many critics regard Lu's win over Roddick as one of the best performances ever by a Taiwanese player in a grand slam.

Lu's world ranking has jumped to 35th from 98th early this year.