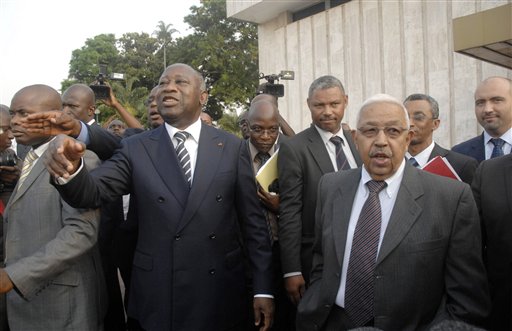 West African leaders blinked in their showdown with Laurent Gbagbo yesterday, taking a military intervention off the table for now so that negotiations can continue with the incumbent leader who refuses to hand over power in Ivory Coast.

ECOWAS had vowed to use force to wrest Gbagbo from the presidential palace if he did not agree on Tuesday to step aside for the internationally recognized winner of last month's election. The presidents of Sierra Leone, Benin and Cape Verde delivered the ultimatum on ECOWAS' behalf, hoping to escort Gbagbo into exile. He refused to budge.

The delegation reported Wednesday on its mission to Nigerian President Goodluck Jonathan, whose country is the biggest player in ECOWAS. Jonathan said the delegation would return to Abidjan on Monday.

"Whenever there is a dispute, whenever there is disagreement, it is dialogue that will solve issues," Jonathan said in the Nigerian capital, Abuja, where ECOWAS is based. "The dialogue is on. They are encouraging us to go back."

ECOWAS, the Economic Community of West African States, has sent combat troops to several nations in the past two decades. ECOWAS defense chiefs met on Wednesday at the Nigeria defense headquarters. A soldier at the headquarters said the meeting was closed to the press.

However, Africa security analyst Peter Pham said practical obstacles may prevent troop deployment to Ivory Coast. The best troops from ECOWAS states are already deployed on missions elsewhere such as Sudan, and even if soldiers could be found, transport logistics would be a challenge, he said.

"Gbagbo called their bluff on their ability to follow through on any sort of military threat," said Pham, of the National Committee on American Foreign Policy, a New York-based think tank. "Sending a peacekeeping force is one thing, but an invasion force that will be resisted by the national military is quite another."

A U.S. State Department spokesman said the United States has begun planning for the possible evacuation of its embassy in Ivory Coast amid concerns of a full-blown conflict.

Spokesman Mark Toner said that a small team of Pentagon officials had arrived in Abidjan to look at "contingencies," including evacuating embassy personnel, and to assess the damage caused by an errant rocket-propelled grenade that hit the outer wall of the compound last week.

The United Nations declared Gbagbo the loser of the presidential runoff vote held on Nov. 28. Chaos in his country already has kept him in power five years beyond his mandate. The U.N., which was tasked with certifying the results of the election, the United States and other world powers have insisted Gbagbo hand over power to Ouattara.

"He has already shown that he is willing his country to get back to peace and to development and to reconciliation between the people," attorney Aref Mohamed Aref said.

But U.N. Secretary-General Ban Ki-moon said earlier this month power-sharing is not on the table and that Gbagbo must leave.

"Any other outcome would make a mockery of democracy and the rule of law," Ban said. "There was a clear winner. There is no other option."

Other African nations have opted for coalition governments in the wake of contested elections which degenerated into violence with varying degrees of success. Ivory Coast, however, is unique in that the United Nations was allowed to certify the election results as part of a peace agreement that ended the 2002-2003 civil war.

In Kenya, Mwai Kibaki and Raila Odinga agreed to a coalition government after election violence following the December 2007 vote left more than 1,000 people dead. Kibaki serves as president and Odinga is the country's prime minister.

And in Zimbabwe, President Robert Mugabe and longtime opposition leader Morgan Tsvangirai agreed to a power-sharing deal in Zimbabwe following the disputed 2008 election, although deep divisions have persisted.

Gbagbo has been in power since 2000. The election was meant to help reunify a country that the war divided into a rebel-controlled north and a loyalist south, but again Ivory Coast stands at the brink of war. While Ivory Coast was officially reunited in a 2007 peace deal, Ouattara still draws his support from the northern half of the country, where residents feel they are often treated as foreigners within their own country by southerners.

Gbagbo insists he did not lose the election, saying the Ivory Coast constitutional council declared him the winner. The council, which is led by a Gbagbo ally, made that announcement after the country's electoral commission said Ouattara won. The constitutional council threw out half a million ballots from Ouattara strongholds in the north, saying violence and intimidation directed at Gbagbo supporters meant results from those areas should be invalidated. The top U.N. envoy in Ivory Coast has disputed that assessment.

While Ouattara has gained widespread international recognition and is creating a shadow government from an Abidjan hotel, Gbagbo maintains control of Ivory Coast's security forces.