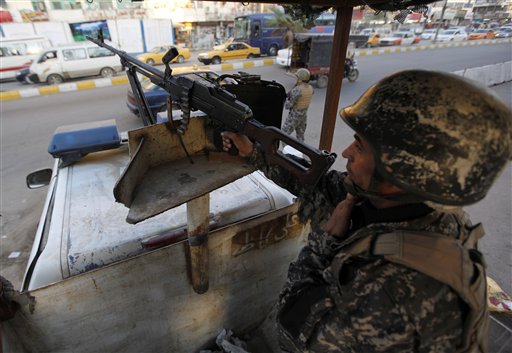 The officer, Lt. Col. Shamil al-Jabouri, had relentlessly pursued al-Qaeda in the tense northern city that was a former stronghold of the militants and the group claimed responsibility for killing him while he slept on a couch. Rescuers worked frantically to clear the rubble of the collapsed building but found no others dead, probably because the attack was early, before most people had arrived for work.

Just ten days ago, al-Jabouri led a raid that ended in the death of the top al-Qaeda figure in Mosul, his colleagues said. And two months ago he had been instrumental in stopping a gang that had been targeting jewelry stores in the city — robberies that are frequently ways for terror groups to refill their coffers.

The successful attack on such a high-profile and well-known target within the police was a reminder of the still-significant gaps in Iraq's security and the challenges the newly formed government faces to close them.

"We've lost a sword of Mosul who chased al-Qaeda terrorists out of the city," said Abdul-Raheem al-Shemeri, a top security official on the Mosul Provincial Council.

The attack began around 6 a.m. when three men wearing explosive vests slipped through an opening in the blast walls surrounding the compound, police said. Police shot one of the attackers in a yard and his vest exploded. Under the cover of that blast, the other two suicide bombers charged into the building.

One of them found his way into the office of al-Jabouri, where he was sleeping on a couch. The attacker blew himself up and killed al-Jabouri instantly, a police officer at the scene said. The other bomber detonated his explosives-laden vest on the single-story building shortly after the first blast, police said.

The twin explosions were so powerful that they brought the whole building down, burying the slain commander under the rubble, police said.

Al-Qaeda's affiliate, the Islamic State of Iraq, took responsibility in a statement posted on the Internet. It said al-Jabouri had been targeted several times before, but had not been deterred from fighting al-Qaeda.

"This day was the decisive one," the group said.

Militants had tried to kill al-Jabouri at least five times before, police officials said. A few months ago, al-Jabouri's guards shot a suicide bomber who approached the commander in an attempt to blow himself up, police said.

Hospital officials in Mosul, 225 miles (360 kilometers) northwest of Baghdad, confirmed the death and said at least one policeman was injured.

Al-Qaeda-linked militants across the country, and especially in Mosul, have made wiping out Iraqi security officials like al-Jabouri one of their main goals, in part to intimidate others from joining the security forces. Suicide bombers have been al-Qaeda's most lethal weapon, killing hundreds of civilians and members of the security forces.

Violence has fallen around Iraq in the past two years, but al-Qaeda and other insurgents have still shown themselves capable of carrying out attacks, particularly on security and government facilities, in hopes of destabilizing the country.

For much of this year, Iraq's politicians were deadlocked trying to form a new government after inconclusive March elections. The paralysis was resolved only earlier this month when parliament finally confirmed the Cabinet of returning Prime Minister Nouri al-Maliki.

A new government was only sworn in last week but political leaders have still not agreed on who should fill important roles including ministers of defense, interior and national security.

Al-Jabouri leaves behind a wife and four children; three of his brothers are also police officers, colleagues said.

"He loved his duty, and he had the highest level of commitment to his work," said police official Mazin Mahmud.