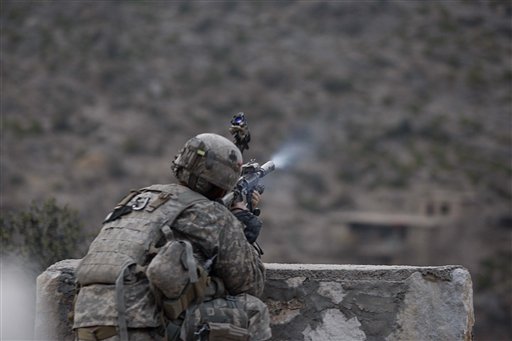 A coalition patrol fought off an insurgent attack in mountainous eastern Afghanistan Tuesday, on a day when two servicemen were killed in the country's troubled south, bringing the death toll for foreign troops in the country for 2010 to 700, according to an AP count.

This year is by far the deadliest for the coalition in the nearly decade-long war, as tens of thousands of additional international troops have poured into the country in an effort to suppress a virulent Taliban insurgency. But while NATO and the United States note progress has been made in the militants' traditional strongholds in the south, they acknowledge gains made remain precarious.

Security has also deteriorated in the north, while many parts of eastern Afghanistan, along the border with Pakistan, remain violent and under militant control. NATO forces often engage in heavy fighting there.

In the eastern province of Kunar, a fierce firefight broke out when U.S. soldiers from Forward Operating Base Fortress came under attack as their patrol drove on a small road through mountainous territory in Chowkey District, an AP photographer with the troops said.

A roadside bomb struck a vehicle in the patrol first, and militants then opened fire on the soldiers with rocket-propelled grenades and rifles. The U.S. soldiers hit back with gunfire and artillery in an hour-long firefight that caused no U.S. casualties. The clash reflected the daily violence faced by NATO forces confronting gunfire, roadside bombs and attacks in most parts of the country.

NATO said two servicemembers were killed by roadside bombs in southern Afghanistan Tuesday. In line with its standard policy, it did not provide the nationality of either casualty or say where they were killed. Late Tuesday, the British government said one of its soldiers was killed in Helmand province but did not give his name.

With 700 international troops killed in Afghanistan, this year has been by far the deadliest of the nearly decade-long war. Previously, the worst year of war in terms of coalition deaths was 2009, with 504 foreign troops killed, according to an Associated Press count.

Some news organizations count the deaths of service members assigned to other countries as part of the war in Afghanistan, making their totals slightly higher.

While the increased numbers of troops and stepped-up operations account for more military casualties, it is civilians who have often borne the brunt of the war. A recent United Nations report said it documented 2,412 conflict-related civilian casualties in the first 10 months of the year. More than three-quarters of them were caused by militant activity, a 25 percent increase from the same period in 2009, the report said.

Many civilians have been killed in bombings. In the troubled southern city of Kandahar, three people died and 26 were wounded Monday when a suicide car bomber detonated his explosives in the center of the city. Police later defused a motorcycle bomb that was apparently meant to go off shortly after the first attack, Kandahar governor's spokesman Zalmai Ayubi said Tuesday.

The Taliban have deep roots in southern Afghanistan, their traditional stronghold, and the region has seen some of the worst fighting this year. Police and the Afghan army are often the target of attacks, along with people working for the government and coalition forces.

Gunmen killed an employee at the Kandahar mayor's office as the man walked down a street Tuesday, deputy police chief Fazel Ahmed Sherzad said. It was not the first time the mayor's office was targeted. In April, gunmen shot dead Kandahar's deputy mayor as he knelt for evening prayers in a mosque.

Along with the insurgency, Afghanistan has also been wracked by political uncertainty. Doubts still linger over September's parliamentary elections, which were marred by widespread irregularities.

The Supreme Court set up a special tribunal Sunday to review complaints of vote fraud, casting doubt over the final election results — which were only issued on Nov. 24. Election officials insist the Supreme Court does not have the authority to change the results.

The uncertainty has led to anger among the hundreds of losing candidates in the election, which saw 2,500 contenders run for the 249 seats.

On Tuesday, about 300 people demonstrated outside the Supreme Court in Kabul, demanding a review of the results.