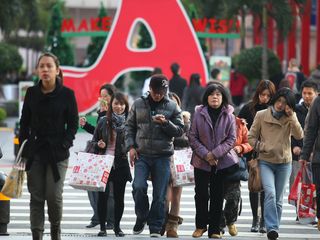 Minister of Economic Affairs Shih Yen-shiang said yesterday that Taiwan's economy will likely show growth of more than 10 percent this year on the back of a recovering economy.

Taiwan's statistics bureau has forecast economic growth of 9.98 percent for this year -- a 21-year high -- and has predicted growth of 4.51 percent in 2011, when the global economy is expected to slow down.

However, Shih said Tuesday that his ministry will work to boost the economic growth in Taiwan to 5 percent for next year and he raised the forecast for this year.

"Various data show that there should be no problem achieving growth of over 10 percent this year," he said at a press conference.

Meanwhile, the Ministry of Economic Affairs (MOEA) has set a "pragmatic" goal of attracting US$7.4 billion worth of investments by foreign companies, US$120 million by Chinese businesses and NT$45 billion (US$1.5 billion) by overseas-based Taiwanese companies next year, Shih said.

So far this year, the MOEA said, it has attracted US$7 billion, US$100 million and NT$40 billion worth of investments from these three sources, respectively.

Total investments from these sources are expected to grow nearly 7 percent in 2011 compared to this year.

It is widely expected that foreign investments in Taiwan will rise sharply from next year, when a range of tariff reductions and eliminations will take effect under a landmark trade pact between Taiwan and China.