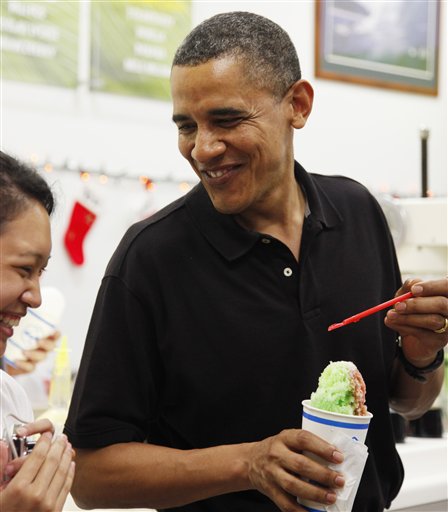 Abercrombie was a friend of Obama's parents and knew him as a child, and is deeply troubled by the effort to cast doubt on the president's citizenship.

The newly elected governor will ask the state attorney general's office about what can be done to put an end to questions about Obama's birth documentation from Aug. 4, 1961, spokeswoman Donalyn Dela Cruz said yesterday.

"He had a friendship with Mr. Obama's parents, and so there is a personal issue at hand," Dela Cruz said. "Is it going to be done immediately? No, the first thing on our list is the economy."

It's unclear what Abercrombie could do because Hawaii's privacy laws have long barred the release of a certified birth certificate to anyone who doesn't have a tangible interest.

Hawaii's health director said last year and in 2008 that she had seen and verified Obama's original vital records, and birth notices in two Honolulu newspapers were published within days of Obama's birth at Kapiolani Maternity and Gynecological Hospital in Honolulu.

So-called "birthers" claim Obama is ineligible to be president because they say there's no proof he was born in the United States, with many of the skeptics questioning whether he was actually born in Kenya, his father's home country.

"What bothers me is that some people who should know better are trying to use this for political reasons," Abercrombie told the Los Angeles Times last week. "Maybe I'm the only one in the country that could look you right in the eye right now and tell you, 'I was here when that baby was born.'"

Abercrombie was unavailable for additional comment Tuesday because he was vacationing on Maui, Dela Cruz said.

The Obama campaign issued a certificate of live birth in 2008, an official document from the state showing the president's birth date, city and name, along with his parents' names and races. The certificate doesn't list the name of the hospital where he was born or the physician who delivered him, information collected by the state as part of its vital records.

Abercrombie, originally from New York, befriended Obama's parents at the University of Hawaii after he moved here in 1959, the same year the islands became a state.

Abercrombie, 72, has said he remembers seeing Obama as a child with his parents at social events, although he acknowledged that he didn't see his parents with their newborn son at the hospital.

The number of requests for Obama's birth information increased this month as the Obama family prepared to vacation in Hawaii.

The Department of Health had received 27 requests for the president's birth information this month as of last Thursday, up from 16 in November, said spokeswoman Janice Okubo.

Information requests rose despite a new state law allowing officials to ignore persistent and repetitive inquiries, a law that has been used about six times by the department, Okubo said.

"It's just a few people, and some of their requests are the same," she said. "The requests fluctuate from month to month."

Takase usually responds to appeals for Obama's birth records by telling requesters that the information they're seeking is contained in records protected by statute.