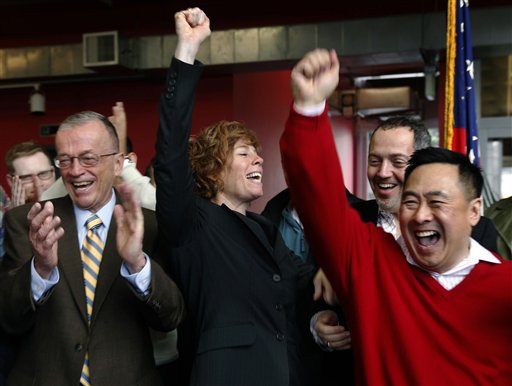 The debate over gays in the military has been settled with a historic decision to allow them to serve openly, but big questions lie ahead about how and when the change will take place, how troops will accept it and whether it will hamper the U.S. military effort in Afghanistan and Iraq.

President Barack Obama is expected to sign into law this week the legislation that passed the Senate on Saturday, an act some believe will carry social implications as profound as President Harry S. Truman's 1948 executive order on racial equality in the military.

The new law probably won't go into practice for months. Obama and his top advisers must first certify that repealing the 1993 ban on gays serving openly will not damage U.S. troops' ability to fight. That ban, known as "don't ask, don't tell," has allowed gays to serve, but only if they kept quiet about their sexual orientation.

In the meantime, the restrictions will remain on the books, although it's unclear how fully they will be enforced. Some believe gay discharge cases will be dropped as soon as Obama signs the law.

The issue of gays in the military has been a contentious one for decades. Until 1993, all recruits had to state on a questionnaire whether they were homosexual; if they said "yes," they could not join. More than 13,500 service members were dismissed under the law.

In the years since the ban went into effect, views in the wider society have evolved. Gay marriage is now legal in five states and the District of Columbia. Opinion surveys say a majority of Americans think it's OK for gays to serve in uniform.

The repeal vote by Congress was a political victory for Obama, who campaigned on ending the ban. Even though opponents have made clear they will continue to argue against the change, Peter Mansoor, a retired Army colonel who commanded a brigade in Iraq, said Sunday he believes the military — from top commanders to foot soldiers — will accept their new orders.

"Pretty much all the heated discussion is over and now it's a matter of the more mundane aspects of implementing the law," Mansoor, a professor of military history at Ohio State University, said in a telephone interview.

Marine Corps Commandant Gen. James Amos, who had argued against the policy change, said Sunday that "the Marine Corps will step out smartly to faithfully implement this new policy."

Amos vowed to "personally lead this effort, thus ensuring the respect and dignity due all Marines."

Implementation begins, under terms of the legislation, with Obama's certification to Congress — for which there's no stated deadline. There is room for argument, however, about what certification must entail and how long it should take. Even after that, there will be a mandatory 60-day waiting period.

Aaron Belkin, director of the Palm Center, a research institute at the University of California, Santa Barbara, said he expects the Pentagon to announce shortly that it needs a long time for training and education to prepare troops for the change — possibly lasting much of 2011.

In a statement Saturday, Defense Secretary Robert Gates said he will begin the certification process immediately. But any change in policy won't come until after careful consultation with military service chiefs and combatant commanders, he said.

Gates has supported Obama's push to repeal the 1993 ban, but stressed a go-slow approach.

"Successful implementation will depend upon strong leadership, a clear message and proactive education throughout the force," Gates said.

Some questions that Gates faces before providing certification have been answered in the recommendations of a yearlong Pentagon study on the impact of repealing the 1993 ban. The study said, for example, that no new standards of conduct are needed. It found that issues of sexual conduct and fraternization can be dealt with by using existing Defense Department rules and regulations, including the Uniform Code of Military Justice.

The study, released Nov. 30, found that two-thirds of service members surveyed didn't think changing the law would have much of an effect on military effectiveness. Of those who did predict negative consequences, most were in combat elements such as the infantry. Their misgivings became ammunition for opponents of repeal, including the influential chiefs of the Army and Marine Corps.

Certifying to Congress also requires writing Pentagon policies and regulations to put in place the repeal law — and stating that the new policies are consistent with standards that allow the military to remain ready for combat, to fight effectively and to ensure cohesion in fighting units.

Elaine Donnelly, president of the Center for Military Readiness and a leading opponent of repealing the 1993 law, said Sunday that the certification process is a "sham" because it will be done by three people who already have stated their support for the change: Obama, Gates and Adm. Mike Mullen, chairman of the Joint Chiefs of Staff.

Donnelly also believes that passage and implementation of the repeal legislation will lead to a wave of lawsuits by gay troops seeking, for example, more military benefits for same-sex partners.

"The story is just beginning," she said in an interview.

Gay rights activists say the complications and uncertainties are being overblown.

"Only three steps are needed to assure a smooth and quick transition to open gay service," Belkin said. They are: an immediate executive order from Obama suspending all gay discharges; a few weeks to put new regulations in place; then immediate certification to Congress that the new law will work.

There remains, however, strong doubt among some that the way ahead will be smooth.

"The acceptance of open homosexuality and the creation and enforcement of new policies could be far more difficult to implement than repeal advocates ever envisioned," said Richard L. Eubank, a retired Marine and Vietnam combat veteran who leads the 2.1 million-member Veterans of Foreign Wars.

Richard Myers, a retired Air Forge general and former chairman of the Joint Chiefs of Staff, told CNN's "State of the Union" on Sunday that the degree of difficulty in the immediate future is hard to predict. "But in the long run I think we can" make the change without hurting military effectiveness.

Not without opposition, both inside and outside the military.

Bryan Taylor of Prattville, Ala., who served four years on active duty and in November was elected to the Alabama Senate, said Sunday in an interview that he sees difficulties ahead.

"I think this is going to pose a lot of challenges for the military," Taylor said. When a soldier openly declares he is gay, "it does create an unnecessary distraction."