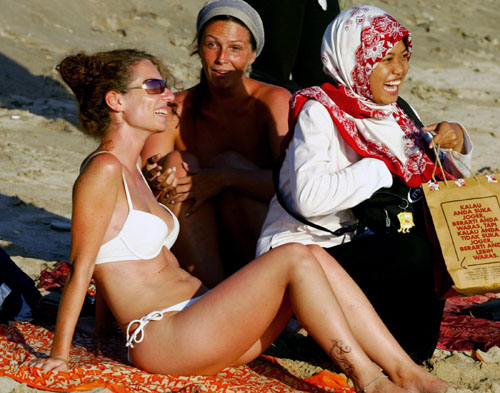 A battle brewing over a draft anti-smut law has laid bare deep divisions within Indonesia and, say critics, threatens its traditionally tolerant approach to Islam.
With parliament back in session from August 18, the world's biggest Muslim nation faces what could prove a defining moment. Pressured by growing demands from Muslim activists, lawmakers are expected to hammer out the legislation in the coming months.
Just what kind of bill emerges - and how much liberal Muslims, secular nationalists, and non-Muslim minorities water it down beforehand - remains to be seen.
Already, proposed changes would remove kissing in public from its catalogue of proscribed acts. Other revisions exempt art and cultural activities from censorship, and reduce the chance of vigilante enforcement by Muslim hardliners.
Supporters say tough measures are necessary to protect the public from corrupting Western influence. Although barred by law, explicit material is available with relative ease in Indonesia, and television programs regularly feature bared flesh and sexual innuendo.
Indonesia's population of 220 million is roughly 85 percent Muslim.
"We need to protect our young generation from moral degradation," said Tifatul Sembiring, chairman of the fast-rising Islamist party, PKS. "There has not been an anti-pornography bill in Indonesia, while (such laws) exist in a western liberal country like America."
Many mainstream politicians, including President Susilo Bambang Yudhoyono, have yet to take a stand, apparently for fear of alienating influential religious forces, including members of the governing coalition.
Some are no doubt also wary of hardline Muslim gangs, who have taken to smashing up nightclubs, bars and discos.
Recent targets include offices of the Indonesian edition of Playboy. The magazine is tame by local standards but the name conjures up powerful images of Western excess.
Opponents see the "Anti-Pornography and Porno-acts" law as a stalking horse for demands for austere Saudi-style Islamic law, which they say is at odds with Indonesian values.
"There is now a growing tendency for conforming Islam, and identifying it, with the Arabs," said Lily Zakiyah Munir, a Muslim intellectual and graduate of a traditional Islamic boarding school.
In general, Islam in Indonesia is "immersed in local culture and local custom", with a wide tolerance for dissent, said Munir, who says the proposed bill dangerously distorts her faith.
"Now things seem to be changing. More and more people ... have reduced religion to what is visible rather than internalizing the values and teachings of the religion."
In recent years, Indonesia has seen rising popularity of modest dress for women and men, increased use of Arabic honorifics and phrases, and national efforts to regulate citizens' behavior.
For example, a proposed new criminal code would impose harsh penalties on unmarried couples living together and other private acts deemed to violate social and religious norms.
Seizing on the decentralization that accompanied the fall of the authoritarian Suharto government in 1998, some locales have passed restrictive laws designed to further public morality.
One such ordinance requires shopkeepers to close their businesses during Muslim prayer-times. Another bylaw gives police the power to detain women for prostitution based on subjective judgments about their appearance.
It was widely ridiculed after the arrest of a schoolteacher waiting innocently on the street for her husband.