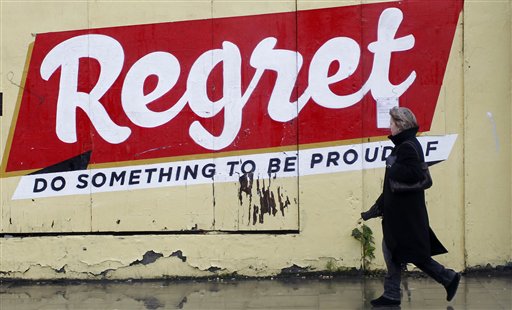 Despite the discontent, Cowen survived a meeting of his Fianna Fail party lawmakers without a direct challenge to his leadership — even though several told Cowen to his face he should quit because he lied to Ireland about secret bailout negotiations.

"I'm sick of it now. I'm sick of having to face people. I feel humiliated, frustrated and betrayed myself," said one of the Fianna Fail rebels, Noel O'Flynn.

A downcast Cowen told Dail Eireann, the parliament, he wouldn't call an election until Ireland's emergency 2011 budget, to be unveiled Dec. 7, is fully enacted in law. He said that process would require several close votes running into February at least — which would mean no election until March. That's too long a delay for many within his own unraveling government.

But Cowen refused opposition calls to bring the budget forward a week, to extend parliamentary sessions from their current leisurely three days a week, and to fast-track votes on tax-raising legislation so that the effort could be finished before Christmas — and before Ireland's banks run out of money.

"This will bring some measure of certainty to a government that is out of control," Enda Kenny, leader of the main opposition Fine Gael, told Cowen during his vain appeal for an accelerated timetable.

Cowen countered that he couldn't even get Kenny and other opposition chiefs to pledge to support the budget. If opposition lawmakers vote against the budget rather than abstain, a single vote either way could decide the outcome.

"It is a matter of personal responsibility for us all to decide if this country is going to put forward the budget or not," Cowen told lawmakers.

At stake is the fate of the reported 85 billion euros (US$115 billion) European Union and International Monetary Fund rescue of Ireland, a nation heading toward bankruptcy next year because the government cannot pay an ever-escalating bill to save its state-backed banks.

Ireland's deficit this year is 32 percent of GDP, the highest in Europe since World War II. Its banks are running short of cash because they can't borrow on open markets, and instead have been relying on short-term loans from the European Central Bank and Irish Central Bank exceeding euro120 billion that they want back.

"The problem here is not that the government is funded into next year. It's that the banks are funded, probably, into next week. Do you hear that sucking sound? It's the sound of the deposits leaving the banks," said David Roche, president of investment consultants Independent Strategy.

He warned that, if Cowen were ousted now or the opposition shoots down the 2011 budget next month, Ireland "won't have a banking system. So if the opposition really thinks that's an intelligent exercise, somebody has lobotomized them of their IQ."

The Irish political and economic crisis, and its uncertain solution, also drove up borrowing costs yesterday for Portugal, Spain, Greece and Italy, all of whom face their own debt-financing struggles. The rising interest rates on eurozone bonds reflect fears that a third member of the 16-nation eurozone might soon join the bailout club alongside the Greeks and Irish.

Cowen said his government on Wednesday would publish a four-year plan spelling out how it intends to slash its deficit by 2014 to just 3 percent of GDP, the limit for eurozone members. The plan proposes to slash euro15 billion ($20 billion) from the country's 2011-14 budget deficits through a combination of cuts and tax hikes, and the biggest correction of euro6 billion is set for next year.

Cowen, who rose to power in 2008 just as Ireland's vaunted Celtic Tiger economy was unraveling, has conceded he must call an election next year but is seeking to delay it as long as possible. His hand was forced Monday when the junior party in his coalition, the Greens, said it would withdraw support once the 2011 budget passed.

The Greens said they expect the country to hold an election by late January, not the March timeline suggested by Cowen's more deliberate schedule.

The Fianna Fail minister for tourism and the arts, Mary Hanafin, accused the Greens of undermining Ireland at a critical moment.

"I'm very annoyed. ... I'm not sure they (the Greens) have shown they have the best interests of the country at heart," Hanafin told RTE.

Hanafin added she wouldn't back any push to oust Cowen — but would put her name forward if the leader's post became vacant.

At the European Parliament in Strasbourg, France, EU monetary and financial affairs minister Olli Rehn gathered Ireland's 12 European lawmakers for a confidential briefing — and stressed they must stop the political infighting long enough to pass the 2011 budget.

"It is essential that Ireland pass the budget in the timeline foreseen, and sooner rather than later, because every day that is lost increases uncertainty," Rehn said.

Patrick Honohan, the Irish Central Bank governor, fueled those fears with a speech yesterday to Dublin accountants. He said Ireland's bank-rescue efforts were right in theory but had failed to restore the confidence of foreign investors, who have withdrawn tens of billions' worth of deposits since the summer.

He said Irish banks must greatly increase their own reserves in response and actively seek foreign buyers.

"They're all for sale as far as I'm concerned," he said of Ireland's six banks, three of which have already been nationalized.

The government already owns 36 percent of Bank of Ireland and 18 percent of Allied Irish. The latter bank expects to hand more than 90 percent ownership to the government next month after it offers euro6.6 billion in new, overpriced shares for sale — and finds the government is the only buyer.