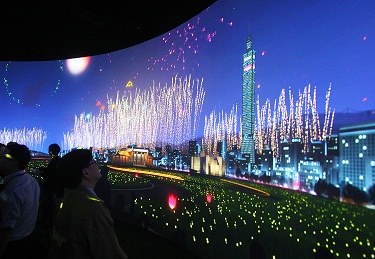 Taiwan’s garden design for the upcoming Taipei International Floral Expo is "beautiful and exceptional" and will "knock your socks off, " said Michael Balston, a trustee of the United Kingdom's prestigious Royal Horticulture Society (RHS) who is in Taiwan to present his own landscape design at the event.

“You probably won't believe me, but the best exhibit is the Taiwanese exhibit. It is streaks ahead of everybody else, " said Balston after touring the Global Garden Area in the Fine Arts Park section of the expo today, two days ahead of the exhibition's grand opening.

Describing the Taiwanese exhibit as“simple and absolutely focused, " he said use of a bamboo tunnel, circular pool, and egg-shaped building that allows the perfect amount of light to hit the structure, is“beautiful and exceptional.”

“This is the sort of thing that will knock your socks off, " he commented.

A landscape architect and garden designer for nearly 30 years, Balston said holding an international expo featuring flowers grown and developed in Taiwan is a good opportunity for the country to show off other strengths of its floral industry apart from the orchids for which it is already world famous.

Moreover, an event of this scale can promote the host country diplomatically, as well as serving as a platform for like-minded botany aficionados and experts to exchange ideas and learn from one another, he pointed out.

Being the brain behind the British Garden, Balston said his design was inspired by another prestigious and esoteric fellowship in Britain that the RHS is closely linked to: the Royal Society.

Established in 1660, the society is the oldest and most prominent scientific academies in existence. The membership roster includes some of the world’s most brilliant minds past and present, such as Isaac Newton, Charles Darwin, Albert Einstein, and James Watson and Francis Crick, discoverers of DNA's double-helix molecular structure.

To commemorate the 350th anniversary of the Royal Society, Balston and his team selected the double helix as its center piece for the garden, which is one of 48 pieces vying for the top cash prize of US$60,000.

Near the back of the 20-by-15-meter garden is a circular pool, in which a double-helix shape supports a globe and bowl. From this water descends like a curtain of rain. The water symbolizes life, Balston explained.

Although specially designed for the expo, the RHS garden will remain in Taiwan after the event ends on April 25.

Participation by the RHS in the Taipei expo is notable due to the organization's prominence and long history. Founded in 1804 under the title“The Horticultural Society of London, " it is widely recognized as the world’s leading body of its kind.

After having hosted and judged numerous flower shows and exhibits around the world, Balston said the Taipei Expo, although not perfect, is a good start. Taiwanese flower exhibitors can gain experience of how to put on similar exhibits in the future.

Holding the expo in the heart of the nation’s capital is ideal because the accessibility will encourage more people to come, he said.

When asked to describe a successful floral expo, Balston said that it should have a positive influence on future floral events if Taiwan is to hold more in the coming years.

“A really successful expo is one that whereby the country becomes so well known from its expo that everybody wants to come, not only the visitors but also the exhibitors. (The key) is keeping the exhibitors happy while they are there and making them want to come back," he said.

The event is set to open on Saturday, and 8 million domestic and foreign visitors are expected to tour the expo during its six-months in operation.