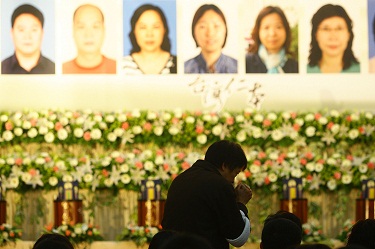 A body part was recovered from the sea off the northeastern coast below the Suhua Highway today, but it remained unclear if it belonged to any of the individuals who have gone missing since the highway was hit by deadly landslides Oct. 21.

"The body part was discovered in water below the highway's 114.5-km point at a depth of 6 meters, " said a spokesman for the search operation's command center.

The remains have been sent to the Yilan District Prosecutors Office for positive identification through DNA testing, the spokesman said.

Three people have been confirmed dead in the Suhua Highway disaster that occurred when Typhoon Megi triggered lethal rockslides that brought down several sections of the road. Another 23 are still unaccounted for.

One of the three confirmed fatalities is a Chinese tourist identified as Gong Yen, and 19 of those who remain missing are Chinese nationals. All are presumed dead, local prosecution authorities said a day earlier after issuing death certificates for the tourists.

Nearly 100 of their family members traveled to the collapsed sections of the cliff-edge highway overlooking the Pacific Ocean today to hold memorial services.

Religious services were held at the highway's 112.8-km and 114.5-km points, where two tour buses carrying the missing Chinese tour leaders and tourists are believed to have fallen off the cliffs after rockslides hit the highway amid torrential rain.

Yao Ta-kuang, president of the Travel Agent Association of the Republic of China, Taiwan, said the bereaved family members of the Chinese victims hope that a monument can be erected at the accident site.

"Some of them plan to revisit the site on the first anniversary of their loved ones' deaths," Yao added.

All the relatives of the Chinese victims were scheduled to depart for home Friday.

Meanwhile, Minister of Justice Tseng Yung-fu said earlier in the day that none of them had applied for state compensation.

Although no Taiwanese law bans Chinese citizens from filing such applications, Tseng said state compensation will be granted only on a "reciprocal basis."