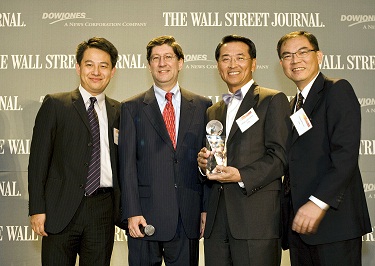 ITRI's FlexUPD topped the consumer electronics category to earn the overall award, beating nearly 600 entries, including those by Nokia, Microsoft and Ford.

This was the second consecutive year that ITRI came top in the category, following its win for FleXpeaker, a paper-thin flexible speaker technology, which made it the first research institution from any Asian country to win the illustrious award.

"To be recognized by an organization as prestigious and well- respected as the Wall Street Journal is a tremendous honor, " said John Chen, general director of ITRI's Display Technology Center, while receiving the award at the ceremony in San Francisco.

He said the new technology was finally realized after 63 failed attempts by ITRI researchers, adding, "I am very proud of our team for developing this innovative breakthrough technology and am pleased they earned such high recognition."

ITRI's FlexUPD ushers in a new generation of flexible electronics. It could be the simplest and most inexpensive technology to allow the mass manufacture of paper-like, flexible flat panel displays thinner than any displays currently on the market, according to Chen.

This flexibility allows two-sided surface visibility for display or non-display products -- such as rollable mobile phone screens, e-books, e-maps and medical sensors that can be worn or wrapped around the body -- to be light, malleable and unbreakable, according to a press release by ITRI.

FlexUPD is available for transfer to companies worldwide. The technology is easily adaptable by panel and display manufacturers and is technologically compatible with mainstream LCD production lines operating now and in the future. It is even compatible with older generations of LCD makers, since manufacturers must only add the de-bonding equipment to incorporate the FlexUPD, the statement continued.

ITRI also received a runner-up award in the semiconductor category for its MDPS technology.

This technology has 180 sensing points distributed over an area approximately 200 centimeters in length. When touched, these detect the position and force and rapidly provide a sensory index.

Now in its 10th year, the 2010 Wall Street Journal Technology Innovation Awards received nearly 600 entries spanning 17 categories. Of these, 275 were sent to a team of judges from research institutions and venture-capital firms, as well as experts and scholars from reputed companies.

Judges were instructed to consider the technology's application, commercialization and market potential, in addition to its innovative characteristics.

The award winners were pre-announced on Sept. 26.