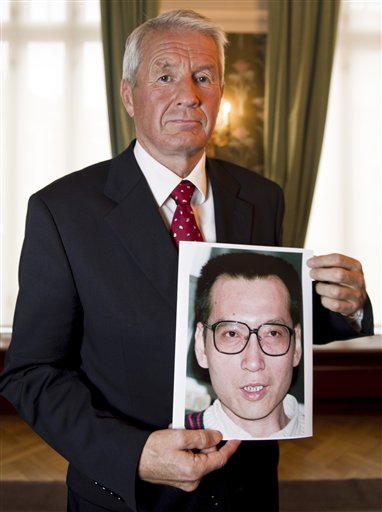 China is pressuring European governments to avoid the Nobel Peace Prize ceremony for imprisoned democracy activist Liu Xiaobo and not make any statements in support of him, several diplomats said today.

The Chinese Embassy in Oslo has sent official letters to a number of European embassies in the Norwegian capital asking them not to attend the Dec. 10 ceremony, two Western diplomats said.

Finland's Foreign Ministry confirmed its embassy in Oslo had received such a letter, but officials could not immediately provide details.

According to one of the diplomats who said he has seen the letter, China cited its repeated position that Liu is a criminal for his advocacy of widespread political reforms and called the prize an interference in China's internal affairs.

The letter also urged embassies not to issue any public statements in support of Liu on the day of the ceremony, he said.

Liu, a writer and outspoken government critic, is serving an 11-year prison term for inciting subversion with Charter 08, a bold call for sweeping political reforms that he co-authored. His wife has been under house arrest since the award was announced in October.

Numerous world leaders, including President Barack Obama, as well as international rights groups have called for Liu's release. That has enraged China, which has been waging a campaign through state media to criticize both Liu and the prize.

In Beijing in the last couple weeks, diplomats from several countries have been called into meetings with Chinese officials, who made similar requests to the letters issued to the embassies in Oslo, said the first Western diplomat.

"They have been quietly getting in touch, inviting people to small meetings and passing the message that way," the diplomat said.

Another diplomat from a European country said his country had not been asked to avoid the event, but he was aware of several other nations that had been approached.

"There is pressure on this," he said.

All three diplomats spoke on condition of anonymity because of the sensitivity of the subject.

Geir Lundestad, the secretary of the Norwegian Nobel Committee, declined to comment on the Chinese letter, but said it's up to the ambassadors to decide whether to attend the ceremony at Oslo's City Hall.

He said more than 1,000 invitations had been sent out, including to all ambassadors to Norway. Even the Chinese ambassador received an invitation, but returned it without answering, Lundestad said.

"All mail we have sent to the Chinese Embassy in Oslo has been returned unopened," he said.

It's unclear who will accept the prize on Liu's behalf, but "people close to the laureate" have conveyed his wish that a children's choir perform at the ceremony, Lundestad said. Arrangements were being made for that, he added.

"Our opposition to the awarding of the peace prize to Liu Xiaobo is clear. We oppose anyone making an issue out of this," Hong told a regularly scheduled news conference.

The campaign against Liu is typical of the more aggressive, hardball diplomacy that China has used recently with European nations over visits by the Dalai Lama and other human rights issues.

The request comes at a sensitive time for several European countries in their dealings with China, which is using its economic clout more.

President Hu Jintao is in France this week, where reports say a deal on the sale of Airbus jets could be signed, while next week British Prime Minister David Cameron visits Beijing hoping to strengthen business ties after his government last month outlined the sharpest cuts to public spending since World War II.

The increased pressure on Western governments comes amid a clampdown on Chinese activists, lawyers and NGO groups who have supported Liu. Many have reported frequent police harassment and increased surveillance since the Nobel announcement.

Dozens of Chinese activists and luminaries had been invited by Liu's wife to attend the Nobel award ceremony on her behalf because she believed mainland authorities were unlikely to allow her to pick up the prize.

"A great deal of attention is being paid to making sure none of these people will leave the country and pick up the prize," said the first Western diplomat.

Earlier this week, a Chinese engineer in southern China who handed out fliers in the streets and public parks publicizing Liu's award was detained on suspicion of subversion, according to rights groups.