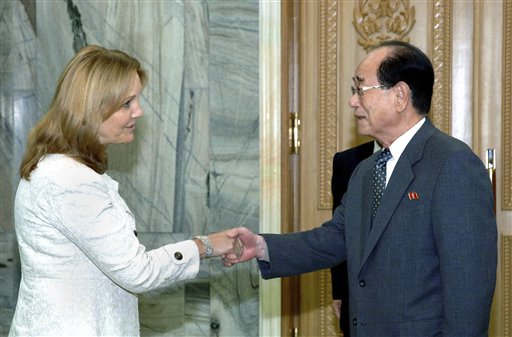 The head of the World Food Program said today she saw many children in North Korea who are "losing the battle against malnutrition" during a visit there.

Executive director Josette Sheeran made the remarks in Beijing on her return from a three-day trip to Pyongyang, the U.N. agency's first top-level visit to the communist country in nearly a decade.

She said she visited an orphanage, a factory, and a hospital where children were being treated for malnutrition.

"I saw many children that are already losing the battle against malnutrition and their bodies and minds are stunted," she said, adding that "the need there for special fortified food for the children is very strong."

Sheeran said she was able to meet with Kim Yong Nam, the head of the country's parliament, the foreign minister and agriculture department officials.

She was also able to visit the agency's operations there. The World Food Program has been providing food aid to North Korea since 1995. The U.N. agency says nearly a third of North Korea's 24 million people are undernourished.

Sheeran said she has worries about the current funding for food aid to North Korea, which has relied on foreign assistance to feed its 23 million people since the mid-1990s.