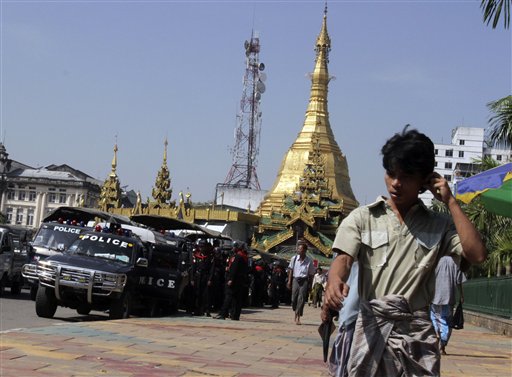 Britain views elections in military-ruled Myanmar this weekend as a "badly missed opportunity" that offer no optimism for democratic change in the foreseeable future, the British ambassador said today.

Ambassador Andrew Heyn said Britain, one of the junta's leading critics, and the 27-nation European Union will continue to press for progress in Myanmar, which is holding its first election in 20 years on Sunday.

"These elections are going to be neither free, nor fair, nor inclusive," Heyn told The Associated Press in Bangkok. "There is nothing in these elections themselves that could give us grounds for optimism."

Britain, the United States and the EU have long maintained economic sanctions against Myanmar to pressure the military government to improve human rights and release detained Nobel Peace Prize winner Aung San Suu Kyi, along with 2,100 other political prisoners.

The junta has ignored those demands. It bills the election as a key step in its "roadmap to democracy," but the polls are widely seen as a ploy to perpetuate its control under the guise of civilian rule.

Britain and others in the international community say that harsh restrictions on campaigning, the repression of Suu Kyi's opposition party and the new constitution reflect the military's intention to continue its commanding role. The military has ruled Myanmar, earlier known as Burma, since 1962.

Suu Kyi's party won the last election in 1990, but the junta ignored the results and has kept her imprisoned or under house arrest for 15 of the past 21 years.

Ahead of the election, the junta has put on a show of force in Myanmar's largest city. Trucks of police in riot gear, some carrying M-16s and tear gas guns, have circled Yangon in recent days, causing traffic jams and fear among residents.

"We were hoping these elections would mark the first step in some genuine move toward a more open and democratic Burma, but I'm afraid that is a missed opportunity. A badly missed opportunity," Heyn said. "That doesn't mean we turn our backs and walk away. We continue to press for progress after the elections."