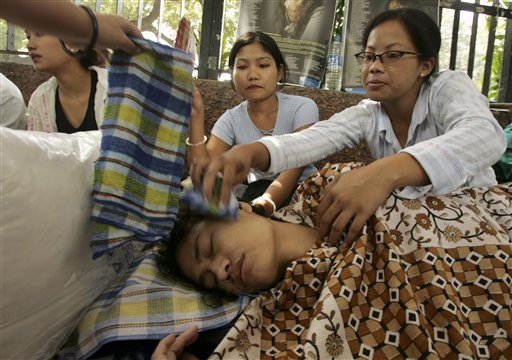 Irom Sharmila had her last voluntary meal on Nov. 4, 2000, in Imphal, capital of Manipur, one of several northeastern states facing armed rebellions against Indian rule. She was arrested three days later and has been force-fed through her nose ever since.

Sharmila has been refusing to eat to demand the repeal of the Armed Forces Special Powers Act, which gives the military powers such as the right to arrest suspected militants without a warrant and to shoot anyone suspected of being a rebel.

The act became law across India in 1958 but was not specifically enforced in Manipur until the 1980s in order to quell a three-decade rebellion.

Bordering Myanmar, Manipur is one of northeastern India's hottest insurgency theaters, with some 17 active militant groups operating in the state of 2 million people. Some 10,000 people have been killed in insurgency-related violence in the past decade.

Sharmila's hunger strike has attracted tens of thousands of supporters — who have dubbed her "The Iron Lady" — and triggered public protests that moved a government committee in 2006 to recommend repeal of the act.

"Irom Sharmila has become a rallying point for Manipuris seeking the withdrawal of the draconian law that has failed to control the insurgency despite being in force for the past 25 years," said local activist Babloo Loitongbom, head of the Human Rights Alert group.

In recent months, New Delhi has said the act should be softened, but no action has been taken.

Sharmila, a locally published poet, began her hunger strike after paramilitary soldiers gunned down 10 civilians near a bus stop in Imphal, saying they suspected militants were in the area after separatist rebels had ambushed troops two days earlier.

She had long been a sympathizer with human rights causes, attending activist rallies and meetings after high school, according to her brother, Irom Singhajit. Three volumes of Sharmila's poetry, which focus on peace and hopelessness, are being translated from her local Meitei language into English.

Sharmila has vowed from her hospital bed in the state capital Imphal to carry on, her brother said. In September, she was awarded the Rabindranath Tagore Peace Prize by one of India's elite business schools.

"She has been rightly named 'The Iron Lady' after completing a decade of a hunger strike," Singhajit said from Imphal. "She told us she would not give up until the government concedes her demand."