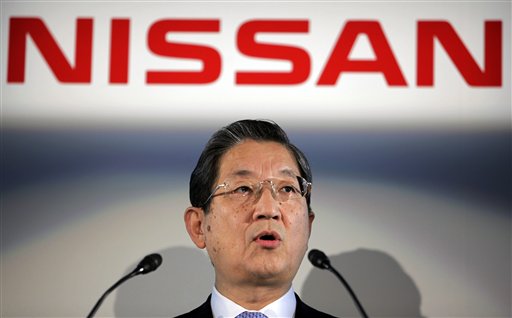 Nissan's quarterly profit quadrupled and the automaker raised its full-year forecasts as surging sales overcame the drag from a strong yen.

Sales at the Japanese automaker, which makes the March subcompact and Leaf electric car, gained 21.4 percent to 2.269 trillion yen (US$28.0 billion).

But Chief Operating Officer Toshiyuki Shiga said the company's performance in the October-March second half was unlikely to be as robust because of the rising yen and increases in raw material and engineering costs.

Those revisions came despite unfavorable currency rates. Nissan had estimated the dollar trading at about 89 yen, but now expects 80 yen for the second half.

The surging yen erodes the value of overseas earnings and hurts Japanese exporters such as Nissan.

Nissan, allied with Renault SA of France, is vying for the spot of Japan's No. 2 automaker against Honda Motor Co. after Toyota Motor Corp., the world's biggest automaker by vehicle sales.

Honda also has shown resilience when faced with a strong yen, reporting robust profit for the latest quarter. It also raised its profit forecast for the full year to 500 billion yen (US$6.2 billion). That would mark an 86 percent jump from the previous year. Toyota reports earnings Friday.

The expected increase in Nissan's second-half costs will partly come from the introduction of 10 new models globally, including the zero-emission Leaf electric car, set for delivery in Japan and the U.S. in December, according to the company, based in Yokohama, a port city southwest of Tokyo.

"Demand for the Leaf has been robust," said Shiga. "Our zero-emission strategy is on track."

The big concern was the strong yen, which Shiga has repeatedly called a "serious crisis" that could drive manufacturing out of Japan. At the same time he said Nissan aims to keep annual production of a million vehicles in Japan.

Nissan has taken the lead among Japanese automakers in shifting production abroad, moving production of the popular March for the Japanese market to Thailand this year. The latest model is the first time the March sold in Japan has been made elsewhere.

The company sold 1.05 million vehicles worldwide for July-September, up 17.1 percent from a year earlier. It expects to sell 4.1 million vehicles for the year through March 2011, up 17 percent.

Nissan's quarterly sales improved across all major regions, led by a solid 38.5 percent increase in China.

Although sales had suffered in North America amid the financial crisis and economic slump, they jumped 16 percent in October thanks to strong SUV, truck and crossover sales.

Nissan is making electric vehicles a pillar of its growth strategy. Chief Executive Carlos Ghosn has said EVs will make up 10 percent of overall auto sales by 2020.

The automaker also introduced its own gas-electric hybrid system this month in its luxury Fuga hybrid, sold as the Infiniti M abroad. Previously it had bought hybrid systems from Toyota.

"Our balance sheet is strong, and our momentum is trending in the right direction," Ghosn said. "In the second half, a wave of innovative product launches will continue to fuel Nissan's profitable growth."

For the fiscal first half, Nissan posted a 208.4 billion yen (US$2.6 billion) profit, nearly double what it earned the same period last year. First half sales surged 28 percent to 4.319 trillion yen (US$53.3 billion).