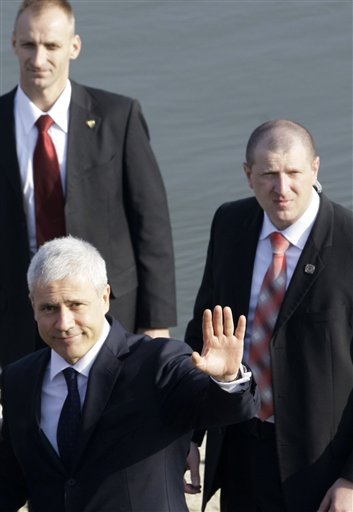 Serbian President Boris Tadic has apologized for Serb wartime atrocities at the site where more than 200 Croats were slain by Serb rebels during the 1991 war.

Tadic is the first Serbian leader to visit Ovcara, the site of a mass grave near the town of Vukovar. He said today he came to "bow down before the victims" and "once again offer words of apology and express regret."

The massacre at Ovcara remains a painful symbol for Croats of Serb wartime brutality.

Tadic and his Croatian counterpart, Ivo Josipovic, will later lay wreaths in the nearby village of Paulin Dvor, where 18 Serbs were killed by Croats in 1991.

It is the strongest condemnation yet of wartime crimes and a symbolic step of reconciliation between the two nations.

THIS IS A BREAKING NEWS UPDATE. Check back soon for further information. AP's earlier story is below.

VUKOVAR, Croatia (AP) — Serbia's president today became his country's first leader to visit the site of a Serb bombardment that leveled the Croatian town of Vukovar, left hundreds dead and forced even more to flee their homes during the region's 1991 ethnic war.

Boris Tadic is also expected to lay a wreath at a mass grave at Ovcara, a pig farm where the bodies of more than 200 Croats were dumped after Serb soldiers dragged them out of a local hospital and executed them — a massacre that remains a painful symbol for Croats of Serb wartime brutality.

Tadic and his Croatian counterpart, Ivo Josipovic, will also lay wreaths for 18 Serbs killed by Croats in a nearby village.

The visits are the strongest condemnation yet of wartime crimes, offering a symbolic step of reconciliation between the two nations after years of mutual accusations over atrocities.

Serbia backed Croatian Serbs when they rebelled against the country's independence from Yugoslavia, which triggered the war. The rebels seized a third of the country. More than 10,000 people were killed and entire communities expelled.

Four years later, Zagreb took back the territory in a blitz offensive, followed by a period of killings and purges of Serbs by Croatians.

The two Balkan neighbors have since largely patched up relations, but tensions persist and each nation still sees itself as the chief victim of the war. They have sued each other for genocide before The Hague-based World Court and nearly 2,400 people remain missing.

Josipovic and Tadic, who belong to a younger generation of politicians not involved in the war, have each made steps to reconciliation.

But some in Croatia oppose Tadic's visit, saying he should have first admitted that Serbs were aggressors in the war. Several members of the small Croatian Party of Rights gathered in Vukovar carrying banners saying: "Apology, Not Regret" and "You're Not Welcome."

On Nov. 18, 1991, Vukovar fell to rebel Serbs after a three-month siege and bombardment.

The Ovcara massacre was one of the worst of the wars in the former Yugoslavia and Serbia has sentenced 13 Serbs to prison terms for the killings.

Croatia convicted one of its soldiers for slaying 18 Serb civilians in Paulin Dvor in Dec. 1991.

Tadic's visit comes at what would be the 50th birthday of Sinisa Glavasevic, a local reporter who was slain at Ovcara.