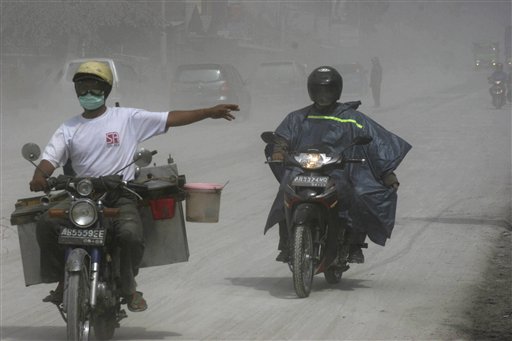 Towering clouds of hot ash gushed from the mouth of a deadly Indonesian volcano today, hours after its most explosive eruption in a deadly week sent more villagers fleeing and killed three more people.

At least 44 people have died since Mount Merapi started erupting Oct. 26, most of the victims on the first day or in the chaotic evacuations. Three died in the powerful Wednesday blast, Eka Saputra, who works at the National Disaster Management Agency, said today.

Scientists — shaking their heads as they watched the wide, fast sweeps of a needle on a seismograph — worried that the worst might be yet to come.

"It looks like we may be entering an even worse stage," said Surono, a state volcanologist, who'd earlier said a week of continual eruptions appeared to be easing pressure behind the magma dome lodged in the Mount Merapi's crater. "We have no idea what's happening now."

The volcano, one of the world's most active, has erupted many times in the last century, often with deadly results. In 1994, 60 people were killed, while in 1930, more than a dozen villages were torched, leaving up to 1,300 dead.

But as with almost all the blueish-gray volcanoes jetting from the landscape in this seismically charged country, tens of thousands of people live on the mountain's rolling slopes. They are drawn to soil made fertile by generations of molten lava and volcanic debris.

More than 70,000 are now packed in crowded government camps well away from the base and may have to stay for weeks, or possibly months.

As rocks and ash rained from the sky, soldiers helped load thousands of frightened villagers into trucks today, including those seeking shelter in three crowded emergency shelters near the foot of the 3,000m (9,700ft) -mountain.

They wound down the mountain, rattling past checkpoints of camouflaged soldiers and police. Elsewhere, several abandoned homes were charred by the latest heat blasts and dozens of carcasses of incinerated cattle littered the scorched flanks.

There have been more than a dozen strong eruptions at Merapi in the last week and thousands of volcanic tremors and ash bursts, temporarily forcing shut nearby airports and — in recent days — prompting officials to close air routes affected by the ash.

It appeared unlikely, however, a Qantas plane forced to make an emergency landing after one of its four engines failed over Batam, an Indonesian island 1,400km (800 miles) to the west, was tied to the smoldering mountain.

Mount Merapi's danger zone was widened Wednesday from 10km to 15km (six miles to nine miles) from the peak, because of the heightened threat. Even so, dozens of villagers displaced by the disaster took advantage of brief lull in activity this afternoon to head back up the mountain to check on their livestock.

"We are really scared, but we have to feed our cattle," said Sukadi, a 48-year-old farmer, as he brought grass to Boyong, his village 9km (six miles) from the crater.

"We're just going quickly," added Semin, 54, his friend. "We'll head back to the camp as soon as we're done... our families are there."

Indonesia, a vast archipelago of 235 million people, is prone to earthquakes and volcanos because it sits along the Pacific "Ring of Fire," a horseshoe-shaped string of faults that lines the Pacific.

The volcano's initial Oct. 26 blast occurred less than 24 hours after a towering tsunami slammed into the remote Mentawai islands on the western end of the country, sweeping entire villages to sea and killing at least 428 people.

There, too, thousands of people were displaced, many living in government camps.