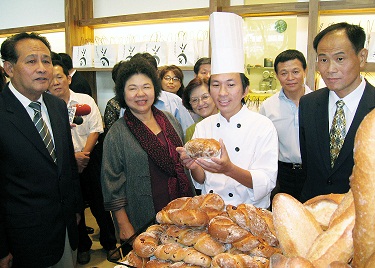 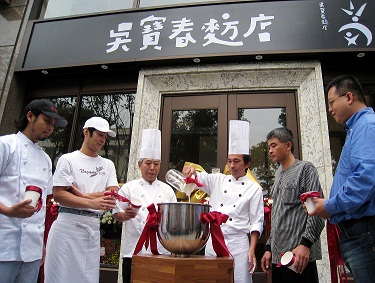 A Taiwanese pastry chef who won the title of Master Baker in the bread category of the 2010 Bakery World Cup in Paris in March opened his own shop in the southern port city of Kaohsiung today.

Wu Pao-chun, who made his name in Kaohsiung after nearly a decade of apprenticeship as a baker and another 10-odd-years as a pastry chef in Taipei, launched the bakery to a long queue of bread lovers.

"Apologies for you for having to wait for so long, " an extremely happy Wu said.

During the bakery's soft opening at the end of October, about 1,000 customers visited it daily, with some late-arriving customers having to leave empty-handed, even though 20 bakers at the shop were working around the clock.

Wu promised customers that he will continue to expand the shop's area and increase the amount of baking equipment. He has an advanced German oven that cost him about NT$1.7 million (US$56,110) , almost triple the price of a high-end local oven, to ensure the bread's moisture and flavor.

Kaohsiung Mayor Chen Chu, who claimed to be "too shy" to stand in the long queue for Wu's bread, baguettes and sandwich loaves, which she could see from her office window, said Wu has made himself a source of pride for Taiwan.

She said that despite his meager educational background and his poor upbringing, Wu worked his way to success and gave a brand name to his work.

Viewing the long queue of customers in front of the shop, located opposite Kaohsiung City Hall, the mayor said that "the Wu Pao-chun bakery has become a new attraction for Kaohsiung."

Meanwhile, Wu invited Chang Chin-fu, a veteran baker who first taught Wu how to make bread, and a Japanese baker who improved Wu's skills when Wu went to Japan to learn the trade, to jointly make a starter dough for products to be baked in the future.

Wu was offered a rent-free three-year lease on the 200-ping (660 square meters) shop by Chen Wu-hsiung, chairman of the Real Estate Development Association of Kaohsiung.