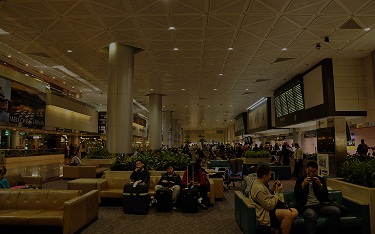 Premier Wu Den-yih asked the Ministry of Transportation and Communications (MOTC) today to find out causes of two power blackouts that occurred a day earlier at Taiwan's glitch-ridden main gateway.

Premier Wu said at the Executive Yuan that he felt "awfully ashamed" for the fact that Taiwan's main gateway had encountered yet another glitch.

The first blackout occurred at Taiwan Taoyuan International Airport's Terminal 1 and Terminal 2, involving the arrivals lounges, the arrivals lobbies and the departure areas, as well as the Terminal 2 baggage belt system, at around 5: 20 p.m. that day.

The blackouts lasted for only minutes, but it took a longer time for the baggage carousel to resume operations, said Wei Sheng-Jhih, vice president of the Taoyuan International Airport Corporation (TIA).

About 1,000 passengers were affected by the power outages.

Losses sustained by the airport as a result of the outages were still being calculated and TIA did not exclude the possibility of seeking compensation from Taipower, Wen said.

Deputy Transport Minister Kuang S. Yeh, who doubles as chairman of the TIA, said at the Legislative Yuan today that the Ministry of Transportation and Communications (MOTC) was continuing to probe the cause of the power outages.

Results of the investigations into what exactly went wrong were expected to be known later in the day, Yeh told legislators across the political spectrum.

Meanwhile, the Ministry of Economic Affairs, which oversees the state-run Taipower, said Taipower should not be blamed for the airport's blackouts, as the company had noted that other electricity users in the Hsinchu and Taoyuan areas managed to activate their power back-up mechanisms after the power-down.

Wei said, however, that the airport suffered from the blackout probably because its power back-up systems take a longer time to activate and because it takes a longer time for the power system of the massive baggage carousel system to get back up and running.

According to the Civil Aeronautics Administration, the government will invest NT$67 billion (US$2.2 billion) in construction and renovation of the airport, which is slated to be completed by 2018.

By that time, the airport will be able to serve 75 million passengers per year, with a planned third terminal able to handle 43 million, around three times the amount that can be handled at Terminal 1 and about twice the capacity of Terminal 2.

The airport, which had been run as a government agency since it opened in 1979, has suffered repeated malfunctions in recent months, including leaking bathrooms, defective jetways and a breakdown of the baggage handling system.