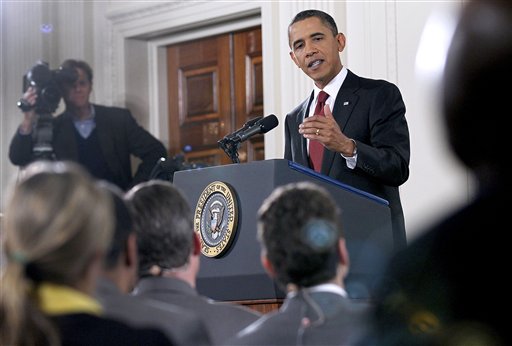 Environmental groups and industry seem headed for another battle over regulation of greenhouse gases, as President Barack Obama said he will look for ways to control global warming pollution other than Congress placing a ceiling on it.

"Cap-and-trade was just one way of skinning the cat; it was not the only way," Obama said at a news conference yesterday, a day after Democrats lost control of the House. "I'm going to be looking for other means to address this problem."

Legislation putting a limit on heat-trapping greenhouse gases and then allowing companies to buy and sell pollution permits under that ceiling narrowly passed the House in 2009 as a centerpiece of Obama's domestic agenda, but it stalled in the Senate.

Republicans dubbed the bill "cap-and-tax" because it would raise energy prices. They then used it as a club in the midterm elections against Democrats who voted for it. Thirty of the bill's supporters were among some 50 House Democrats whom voters turned out of office Tuesday.

"It's doubtful that you could get the votes to pass that through the House this year or next year or the year after," Obama said yesterday.

The new battle over global warming in Congress will target the Environmental Protection Agency, which is poised to regulate greenhouse gases for the first time, after the Supreme Court ruled in 2007 that it could treat heat-trapping gases as pollutants.

John Engler, a former Michigan governor who leads the National Association of Manufacturers, said he expects a Republican-controlled House to take a "fresh look that will get at a lot of questions" dealing with the EPA's role in regulating greenhouse gas emissions.

"While there will be attacks on (EPA's) authority, it is important that there not be any surrender on EPA's ability to do the job," said Trip Van Noppen, president of Earthjustice.

The Senate in June rejected by a 53-47 vote a challenge brought by Alaska Republican Lisa Murkowski that would have denied the EPA the authority to move ahead with the rules. Six Democrats voted with Republicans to advance the "resolution of disapproval," which the White House had threatened to veto. A similar resolution has broad support in the House, with 140 co-sponsors.

Engler said efforts to block the EPA will only be strengthened by Tuesday's election results.

Obama, when asked about the EPA's authority yesterday, said that while a court order gave the EPA jurisdiction, the agency still wants help from Congress.

"I don't think ... the desire is to somehow be protective of their powers here," Obama said.

"One of the things that's very important for me is not to have us ignore the science, but rather to find ways that we can solve these problems that don't hurt the economy, that encourage the development of clean energy in this country, that, in fact, may give us opportunities to create entire new industries and create jobs."