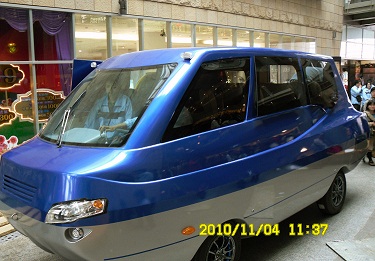 An electric vehicle that can run on land and water will debut at the upcoming 2010 Taipei International Flora Expo, the vehicle's developer said today.

Starting in two weeks' time with four vehicles, Wong said the tour will take visitors across the Keelung River from the expo's Dajia Riverside Park site to the Miramar shopping mall on the other side.

Wong said his company has received many inquiries about the vehicle for touristic or rescue purposes.

The vehicle marks the company's formal entry into the electric- car sector, its second green-energy business following its earlier involvement in solar power.

But CMC has been developing amphibious vehicles for more than 10 years, the company stated, and first entered the Guinness World Records in 2000 with a vehicle that ran 344 kilometers on a single power charge using zinc-air fuel cells.

The company further pushed the record to 524 km in 2003 by using zinc-air fuel cells combined with nickel-zinc batteries.