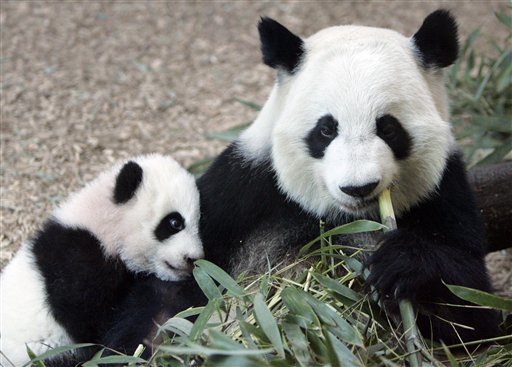 A giant panda gave birth to her third cub Wednesday at Zoo Atlanta, one of only four U.S. zoos that house the endangered animals.

The cub weighed about 4 ounces and was about the size of a cell phone, zoo officials said. Mother panda Lun Lun had been on round-the-clock birth watch since Oct. 22, when an ultrasound confirmed the pregnancy.

The cub, the only giant panda born at a U.S. zoo so far this year, was born at 5:39 a.m. in a specially prepared birthing den, zoo officials said.

"We have a very healthy giant panda cub," said zoo veterinarian Sam Rivera. He said zoo officials probably will get a chance to examine the cub and determine its gender next week after Lun Lun feels comfortable with setting it down.

It will take several weeks for the cub to develop its signature black and white fur.

"Lun Lun is an experienced mom. She knows exactly what to do, and she's doing the right thing," Rivera said. He said while Lun Lun's mammary gland development indicates she's producing milk, he can't be certain yet whether the cub is nursing. "The first week is critical," he said.

Zoo officials said the cub will go on display next spring. Panda fans can keep up with the cub's growth at the zoo's online panda cam, which showed Lun Lun licking and cuddling the cub Wednesday morning.

Pandas sometimes act pregnant even when they are not, which can keep zoos guessing until the animal actually gives birth. Zoo officials said this was the first time the zoo has been able to use an ultrasound to confirm a pregnancy with Lun Lun.

"It's been unique that we were able to monitor the cub since it was pea-sized," Rivera said.

Giant panda gestation averages 135 days but can range from 83-197 days.

The panda is trained to cooperate with medical procedures and tests, but refused those interventions during her last two pregnancies.

The other U.S. zoos with giant pandas are in San Diego, Memphis and Washington. Researchers estimate only 1,600 to 3,000 of the endangered species remain in the wild and another 200 in captivity.

Xi Lan still lives in Atlanta, but his older sister Mei Lan was returned to China in February to help breed more of the endangered animals. China owns all the pandas in the U.S., even the cubs that are born here.

The new cub won't be named until it is 100 days old, as is tradition in China.