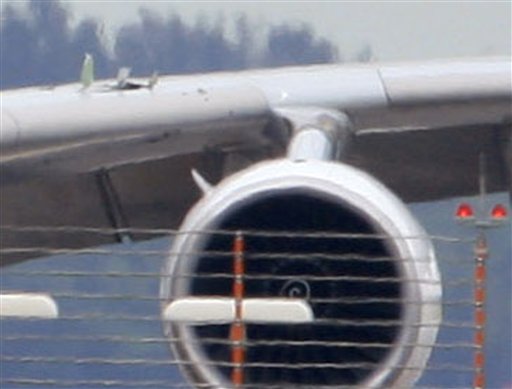 Qantas grounded all of its six Airbus A380 superjumbos today after one of them blew out an engine, shooting flames and debris that forced it to make an emergency landing in Singapore with 459 people aboard.

The carrier said the double-decker Airbus A380 plane landed safely with no injuries.

It was most serious mid-air incident involving the A380, the world's largest jetliner, since it made its debut in October 2007 with Singapore Airlines flying it to Sydney — the same route that Qantas flight QF34 was flying when it was stricken today.

Qantas said there had been no explosion, but witnesses aboard the plane and on the ground reported blasts.

After the plane touched down in Singapore, the engine closest to the fuselage on the left wing had visible burn marks and was missing a section of plate that would have been painted with the red kangaroo logo of the airline. The upper part of the left wing also appeared to have suffered some damage.

One passenger, Rosemary Hegardy, 60, of Sydney, told The Associated Press that she heard two bangs and saw yellow flames from her window.

"There was flames — yellow flames came out, and debris came off. ... You could see black things shooting through the smoke, like bits of debris," she said.

In another seat, Tyler Wooster watched as part of the skin of the wing peeled off, exposing foam and broken wires.

"My whole body just went to jelly and I didn't know what was going to happen as we were going down, if we were going to be OK," Wooster told Australia's Nine Network news.

Hegardy said the pilot informed passengers of the engine trouble and that the plane would have to dump fuel before it could land.

Witnesses on the western Indonesian island of Batam, near Singapore, reported hearing a large blast and seeing pieces of debris — including panels painted white and red — falling onto houses and a nearby shopping mall.

The airline had no immediate comment on whether the engine trouble was related to eruptions of Indonesia's Mount Merapi over the past 10 days. Given the timing of the malfunction, 15 minutes after takeoff from Singapore at 9:56 a.m. and before the flight had time to approach the mountain, there appeared to be no connection.

The plane landed after one hour and 50 minutes.

The flight is a regular service that flies between Sydney, Singapore and London. Qantas' A380s can carry up to 525 people, but flight QF34 was carrying 433 passengers and 26 crew, all of whom were evacuated by a step ladder in an operation that lasted two hours.

Qantas spokeswoman Emma Kearns in Sydney, Australia, said there were no reports of injuries or an explosion on board. The airline described the problem as an "engine issue" without elaborating.

"We will suspend those A380 services until we are completely confident that Qantas safety requirements have been met," Qantas CEO Alan Joyce told a news conference in Sydney.

Aviation expert Tom Ballantyne told reporters that it was today's troubles were "certainly the most serious incident that the A380 has experienced since it entered operations."

He said while the engine shutdown couldn't have caused a crash. The planes are designed to fly on just two engines, and the pilots are trained to handle engine failures, he said.

He also pointed out that the problem appeared to be with the engine, made by Rolls-Royce.

"It's not like the aircraft is going to drop out of the sky," Ballantyne, Sydney-based chief correspondent at Orient Aviation Magazine, said by telephone from Brunei.

Still, the incident is likely to raise safety questions about one of the most modern aircraft, which has suffered a series of minor incidents.

In September 2009, a Singapore Airlines A380 was forced to turn around in mid-flight and head back to Paris after one of its four engines failed. On March 31, a Qantas A380 with 244 people on board burst two tires on landing in Sydney after a flight from Singapore.

The other issues with the A380s have all been relatively minor, such as electrical problems, Ballantyne said.

Ballantyne said airlines love the A380.

"They describe it as a passenger magnet. Passengers actually ask to fly on it," he said.

Qantas' safety record is enviable among major airlines, with no fatal crashes since it introduced jet-powered planes in the late 1950s.

But there have been a run of scares in recent years across a range of plane types. The most serious — when a faulty oxygen tank caused an explosion that blew a 5-foot hole in the fuselage of a Boeing 747-400 over the Philippines — prompted aviation officials to order Qantas to upgrade maintenance procedures.