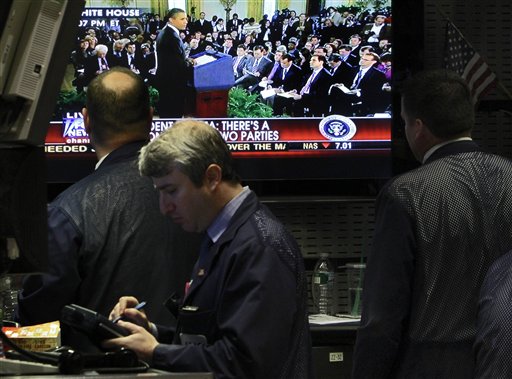 Next year will be a year unlike any other for the stock market.

The Republican takeover of the House of Representatives on Tuesday means Wall Street will be contending with three situations in 2011 that drive stock prices:

— The year before a president faces re-election.

— The year after a president has lost control of Congress.

— The second year of a fragile economic expansion.

The market often behaves a certain way in each of those situations, but history isn't helpful now because investors have never faced this trifecta before. What's clear is that what happens in Washington will be watched even more closely by investors next year.

"This election is more important than the average one because of all of the economic and policy issues that remain uncertain," says Robert Doll, the chief investment strategist at BlackRock, an investing firm with $3.4 trillion in assets under management.

Any mishandling of the economy by politicians will mean that "the fragile economic recovery we have is going to be hit over the head, and we would have to think about a double-dip recession all over again," Doll says.

Here's a look at the three situations coinciding next year an dhow they coulf affect the stock market:

—THE YEAR BEFORE A PRESIDENT RUNS FOR ELECTION:

Since 1945, the Dow Jones industrial average has gained an average of 19 percent the year before a sitting president runs. That's more than double the 7.9 percent average annual gain during the same period. If you take out the 10 years when the president was running, the average gain drops to only 5.8 percent.

—THE YEAR AFTER A PRESIDENT LOSES CONTROL OF CONGRESS

Presidents whose party controlled both houses of Congress have lost at least one chamber five times in the past 80 years. Stock returns in the following year haven't followed a pattern. The Dow plunged 53 percent in 1931 and gained 34 percent in 1995. Gains in the other three years ranged from 2.2 percent to 20.8 percent. That makes it impossible to forecast what will happen this time. The change in Congress in 1931 came during the Great Depression, while the 1995 transition came during the first part of the Internet boom. The next Congress faces a fragile economic period, which could mean that the market offers another single-digit gain like this year.

Gridlock hasn't been great for stocks. Since 1945, the Standard and Poor's 500 index has gained 4 percent in years when Congress was split between parties. It increased 8 percent when Congress was controlled by one party and the White House another. When a single party was in control of Washington, the index gained an average of 11 percent.

The economy is growing at a 2 percent annual rate, according to the latest estimate by the Commerce Department. That's slow by historical standards and shows that the end of the recession 17 months ago hasn't translated into a robust economic expansion.

Stocks have been in a bull market for 18 months, pushing the Dow up 70 percent since it hit a 12-year low in March 2009. That gain is larger than normal but isn't surprising considering that the rally followed the worst financial crisis since the Great Depression. During slow recoveries like this one, bull markets typically last 30 months and bring gains of 44 percent overall, according to Ned Davis Research.

Corporate profits are improving, and wealthy consumers are starting to make some costly purchases. If the economy continues to improve, stocks will likely rise. But don't expect large gains because the economy needs to grow 3 percent or more to bring down the country's 9.6 percent unemployment rate. That's unlikely soon because residential and commercial construction remains weak, and construction fuels economic recoveries.

So what's an investor to do given this abnormal year? The best thing may be to follow your long-term plans regardless of what happens in Washington.

"There's no way to tell what's going to happen, or we would all be rich," says Paul Larson, the chief equities strategist at Morningstar.