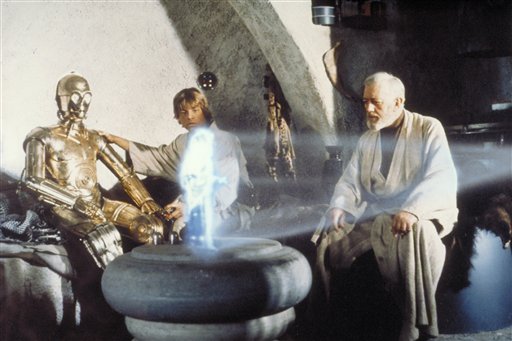 Scientists say they have taken a big step toward displaying live video in three dimensions — a technology far beyond 3-D movies and more like the "Star Wars" scene where a ghostly Princess Leia image pleads, "Help me, Obi-Wan Kenobi."

In that classic movie, the audience sees her back before a new camera perspective shows her face. Such a wraparound view of a moving image was just movie-trick fantasy in the 1977 film, but now?

"It is actually very, very close to reality. We have demonstrated the concept that it works. It's no longer something that is science fiction," said Nasser Peyghambarian of the University of Arizona.

Actually, the results he and colleagues report in today's issue of the journal Nature look more like a slide show than a video. In experiments, the technology displayed a new image only every two seconds. That's only about one-sixtieth as fast as the system would need to produce true video.

In addition, the image allowed only a 45-degree range of viewing angles because of how the experiments were done. The researchers are working toward providing a full, 360-degree view.

In fact, Peyghambarian figures that his team could produce a true 3-D video screen that might reach living rooms in perhaps a decade. And you wouldn't need those funny glasses to enjoy it.

Apart from the possibilities for entertainment, it might allow doctors in multiple places around the world to collaborate on live surgery, he said. If the screen were placed flat on a table, they could get a 360-degree view by walking around, just as if the patient were lying there.

While the 3-D image would not actually be projected into the air, that's how it would appear to a person looking into the screen.

Other possibilities, Peyghambarian said, including eye-catching ads at shopping malls and a technique to enable designers of cars or airplanes to make changes more quickly. Live 3-D video could also help the military train troops, he said.

We see objects by perceiving the light that bounces off them. Peyghambarian's technology uses holograms, two-dimensional images that reconstruct the light that would have bounced off a physical object, making it look 3-D.

In contrast, technology used for 3-D movies like "Avatar" or the election-night "hologram" of a CNN reporter in 2008 produces images that don't show different views from different angles, as a genuine hologram or a real object does, Peyghambarian said.

Many people have seen holograms of still images. The Arizona group is one of maybe half a dozen around the world that are trying to move that technology into 3-D video, said V. Michael Bove Jr. of the MIT Media Lab.

Bove said several groups, including his own, have in fact produced such videos, achieving the magic rate of 30 frames a second. But those displays are only about the size of a postcard or smaller, he said, and one big challenge is how to make the display bigger.

The Arizona group uses a plastic plate that stores and displays an image until another image is "written" electronically on it. That approach might someday allow for much bigger images, said Bove, who is collaborating with the Arizona researchers but did not participate in the new study.

Peyghambarian said he now gets an image every two seconds on a 4-by-4-inch device. His team also has a 1-foot-square plate, but that takes longer to replace images.

He would like to scale up to plates about 6 or 8 feet square to show people at full size, so they could appear at meetings without having to actually show up.

His work was sponsored by the National Science Foundation and the military.

Bove compared the state of holographic video research to that of developing television about 80 years ago. Different groups are taking different approaches, and it is not clear which technology will prove best, he said.

In any case, he said, the Arizona system "produces bright, sharp holographic images. ... This thing is beautiful."