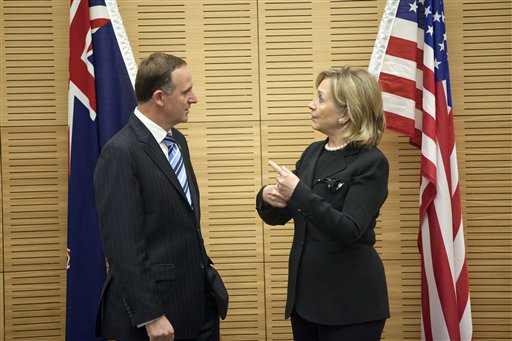 U.S. Secretary of State Hillary Rodham Clinton says the Obama administration is working "nonstop" on a path to resume stalled peace talks between Israel and the Palestinians, and she plans to meet Israeli Prime Minister Benjamin Netanyahu when he is in the U.S. next week.

Visiting the capital of New Zealand today, Clinton said she is "very involved in finding the way forward." And she said: "I think we will be able to do so."

Clinton says U.S. and Israeli officials are working on scheduling a meeting between her and Netanyahu, who is already set to meet Vice President Joe Biden when he travels to the U.S.

Clinton is in New Zealand toward the end of a two-week, seven-nation tour of the Asia-Pacific.