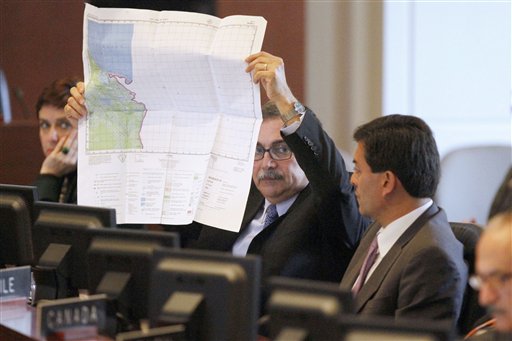 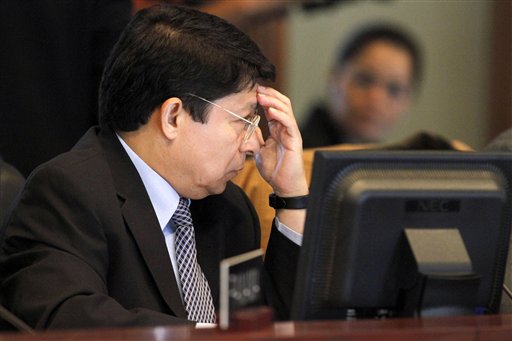 Costa Rica pressed yesterday for the Organization of American States to intercede in a two-century-old boundary dispute with neighboring Nicaragua over a river that runs between them.

Costa Rica asked the Washington-based organization to tell Nicaragua to stop dredging in the San Juan River and to remove about 50 Nicaraguan soldiers from its territory. Nicaragua argued that bilateral talks should continue instead.

Officials from the two Central American neighbors met for hours after a special session of the OAS' Permanent Council but appeared to come no closer to a resolution.

The two sides planned to continue informal talks with OAS Secretary-General Jose Miguel Insulza through the night yesterday, Costa Rican Foreign Minister Rene Castro said, in hopes of having a proposal to present today when the OAS resumes the special session.

"Reaching a consensus will not be easy," Castro told Costa Rican news media in a video conference. "It's going to be a long night."

Before talks mediated yesterday by Insulza and the permanent council president, Joaquin Maza of El Salvador, Castro asked for an OAS resolution that would force Nicaragua to withdraw troops from land that Costa Rica claims along the San Juan and to suspend dredging work.

Costa Rica claims the dredging has caused environmental damage, which Nicaragua denies. Castro also proposed that Insulza, a Chilean, visit the region and present a report to the OAS no later than next Monday.

"Costa Rica is not trying to change the current delineation of the border, or to take over any part of the river that belongs exclusively to Nicaragua," Castro said during the OAS special session. "But that doesn't mean that Costa Rica will allow Nicaragua to incur on its territory. ... We will not accept unilateral changes of the boundary."

"Nicaragua will continue to exercise its sovereignty and defense, the cleanup of the San Juan River and the fight against drug trafficking on our border," Castro said.

In a televised message later yesterday, Costa Rican President Laura Chinchilla reiterated her country's claim that Nicaragua has invaded her country in "a serious violation of our sovereignty, our territory and our environment."

Chinchilla said she will continue to look for a peaceful solution to the crisis.

"Our instruments are dialogue and international law," she said.

Costa Rican officials announced Monday that they were reinforcing their police presence on the border after detecting a military encampment with a capacity for 50 men in which the Nicaraguan flag was flying.

The river has been a source of disputes for nearly two centuries. Last year, the International Court of Justice in The Hague, Netherlands, the United Nations' highest court, set travel rules for the San Juan, affirming freedom for Costa Rican craft to navigate the waterway while upholding Nicaragua's right to regulate traffic.

The latest argument stems from Nicaragua's dredging project. Costa Rica objected to the plan when it was announced last year.

On Tuesday, Nicaraguan President Daniel Ortega said the world court in The Hague should again be the one to settle the dispute, not the OAS.