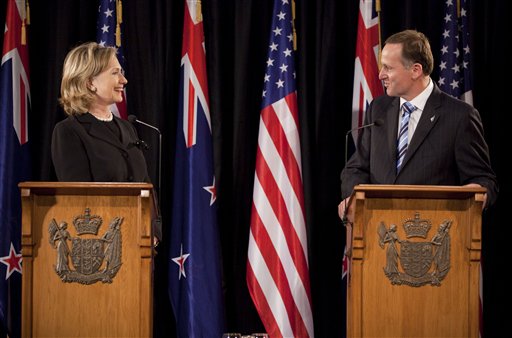 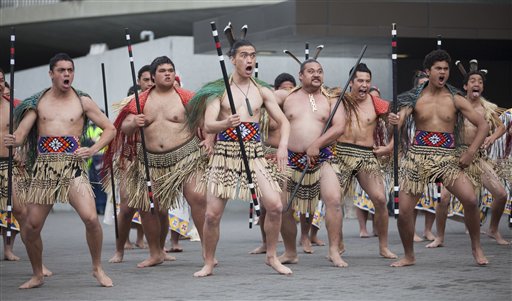 The U.S. and New Zealand moved today to fully restore relations that have been strained by a lingering 25-year nuclear dispute that has hampered military cooperation.

The document "makes it clear that we want to cooperate across the board in every aspect of our civilian efforts and our military as well," Clinton told reporters at a news conference with McCully and New Zealand's Prime Minister John Key.

She commended New Zealand for a defense strategy it released Monday, noting it emphasized "the U.S. and New Zealand will continue to be close security partners over the next 25 years," and that it said the two states "want to do more" in the area of military cooperation, from joint exercises to training and officer exchanges.

"In my view, we have turned a very important page in the history of U.S.-New Zealand relations," McCully said.

The declaration establishes a "strategic partnership" that includes enhanced political-military discussions that had been curtailed due to the nuclear row. One goal of those talks will be to resume full military-to-military cooperation.

"It sets the stage for a deeper and more regular dialogue on everything from regional security issues to clean energy to our response to natural disasters," Clinton said.

Despite a long history of friendship, and previous attempts to put the contentious issue behind them, New Zealand's 25-year-old "nuclear free" status, which includes a ban on nuclear-powered vessels and those carrying atomic arms, has continued to be problematic.

Clinton used the opportunity to plug President Barack Obama's desire to rid the world of nuclear weapons, a move aimed at pleasing the New Zealanders.

She noted that Key had attended last year's Nuclear Security Summit in Washington. That meeting was aimed at "effectively limiting the spread of nuclear weapons, which is in line with President Obama's vision of a world free of nuclear weapons," she said.

Since 1985, U.S. warships have been denied entry into New Zealand ports because the Pentagon refuses to declare if they are carrying nuclear weapons. As a result, New Zealand has been effectively dropped from a joint security treaty with the U.S. and Australia.

Both Clinton and Key hailed U.S.-New Zealand relations as being the best they have been in 25 years. On her arrival for meetings at New Zealand's parliament, she was treated to a colorful traditional Maori welcome ceremony. Her movements around Wellington were covered in detail by local media.

Clinton is in New Zealand as part of a marathon, two-week, seven-nation tour of the Asia-Pacific region. She has already visited Vietnam, China, Cambodia, Malaysia and Papua New Guinea. After spending Friday in Christchurch, New Zealand, she will head to Australia, where she and Defense Secretary Robert Gates will meet their Australian counterparts on Monday.