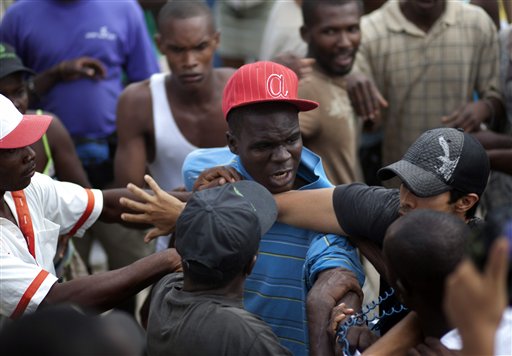 For nearly 10 months, more than 1 million people in Haiti's earthquake camps have been walking a precarious line: Trying to get out and find good homes without losing their tents and the possessions they still have.

Now a potential hurricane threatens to upend that careful balance. The Haitian government has called for the voluntary evacuation of all the quake zone's camps ahead of Friday's expected arrival of Tropical Storm Tomas, telling residents to find somewhere else to go.

"People said, 'We've been displaced before. What's going to happen to us? Are we going to be able to get back?'" said Bryant Castro, an American Refugee Committee staffer who is managing the nearly 8,000 people at the Corail-Cesselesse relocation camp.

Survivors of the devastating Jan. 12 earthquake have fought forced evictions, weathered storms, organized themselves into security committees, and rallied for better services and aid. Now they are being told to leave — and few have anywhere to go.

The government says there are more than 1,000 shelters available, but the term is loose and can refer to any building expected to stand up to high winds. The U.N. Office for the Coordination of Humanitarian Affairs said there is a need to identify safe public infrastructure for use as potential storm shelters.

Painfully slow reconstruction from the quake, prior storms and the recent commitment of government resources to fight a growing cholera epidemic have left people with few options as overtaxed aid workers struggle to help.

"We are using radio stations to announce to people that if they don't have a place to go, but they have friends and families, they should move into a place that is secure," said civil protection official Nadia Lochard, who oversees the department that includes the capital, Port-au-Prince.

Fear and confusion have swept through many of the camps. Tensions boiled over into scuffles yesterday at Corail when managers tried to explain a planned voluntary evacuation of nearly 8,000 people from ShelterBox tents once promised to be hurricane-resistent.

The tentative plan there, as at several other camps, is to move some people to schools, churches, and other structures such as abandoned prisons. But most of the homeless are being told to seek out friends or family who can take them in.

As news of Tomas' predicted pass slowly filtered through Port-au-Prince via wind-up radios and megaphone announcements, unease set in among people who already lost homes and loved ones in the quake and saw their tents ripped apart in lesser storms this year.

"The tension is elevated. People are really concerned about their belongings. They're posing a lot of legitimate questions," Castro said.

Concerns are even greater in the western reaches of Haiti's southern peninsula, where heavy flooding is predicted.

Disaster officials have extended a red alert, their highest storm warning, to all regions of the country, as the storm is expected to wind its way up the west coast of the island of Hispaniola, which Haiti shares with the Dominican Republic, through storm-vulnerable Gonaives and Haiti's second-largest city, Cap-Haitien, sometime Friday.

The U.S. National Hurricane Center in Miami announced a hurricane warning for Haiti, along with tropical storm watches for Jamaica, the southern coast of the Dominican Republic and eastern Cuba. A hurricane watch was issued for the southeastern Bahamas and Turks and Caicos.

Late yesterday, the storm was about 470km (295 miles) southwest of Port-au-Prince, and about 210 miles (335 kilometers) southeast of Kingston, Jamaica. Tomas had maximum sustained winds of 45 mph (75 kph) and was moving northwest at 9 kph(6 mph).

Jamaican soldiers will evacuate hundreds of people in the island's eastern region today and move them into emergency shelters ahead of the storm, Information Minister Daryl Vaz said.

"We will be going all out to make good sense prevail," he said at a news conference today.

Most of the people who will be evacuated are squatters living along unstable gullies that often flood during heavy rainstorms.

Jamaica is still struggling to recuperate from floods unleashed by Tropical Storm Nicole in late September that killed at least 13 people and caused an estimated US$125 million in damage.

People who are still using boats to move about in the island's rural western regions also will be moved to shelters, said Ronald Jackson, of the emergency management office.