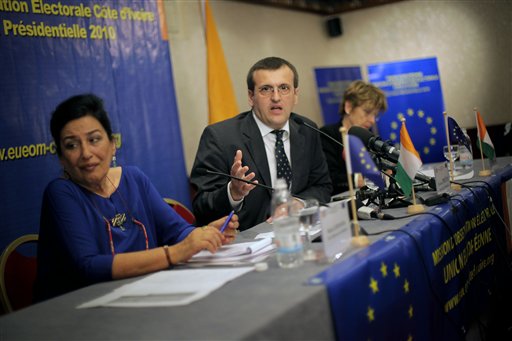 President Laurent Gbagbo will face Ivory Coast's main opposition leader in a runoff later this month to decide this volatile West African nation's next leader, according to final results announced today by the electoral commission.

The figures put Gbagbo in first place with just over 38 percent of Sunday's vote — well short of the 50 percent needed to avoid a second round.

Opposition leader Alassane Ouattara, who is wildly popular in the formerly rebel-held north, had about 32 percent, according to an Associated Press tabulation.

The party of ex-president Henri Konan Bedie, however, called for a recount, accusing the electoral commission of publishing false results in a "clear desire" to rig the poll.

Bedie, who was toppled in 1999 during the nation's first coup, had 25 percent of the vote, according to the results.

The poll was the first here since civil war split the world's biggest cocoa producer in two, leaving rebels in control of the north. The country officially reunited in a 2007 peace deal, but deep tensions remain and many fear violence could erupt if results are disputed.

In New York, the U.N. Security Council urged all candidates to remain committed "to a democratic, peaceful and transparent completion of the electoral process" and accept the outcome.

It also commended the Ivorian people "for their massive and peaceful participation in this crucial vote, which represents a historic step towards the restoration of sustainable peace."

The preliminary results must be certified by the country's constitutional council before the count is finalized. A runoff would then be due Nov. 28.

Fears over possible violence as authorities tabulated votes over the last several days left many stores and market stalls closed this week in the main city, Abidjan, where some university classrooms were only half full.

At one local Internet cafe, a few young men checked election results online, but manager Pakome Nanguy complained that people weren't coming in like they normally do.

"They're afraid," he said. "But there's no reason to be. Everything has been calm and orderly."

About 4.8 million out of 5.7 million registered voters cast ballots in weekend poll, according to the electoral commission, meaning turnout was high about 84 percent.

The race pitted Gbagbo, 65, against 13 challengers including 68-year-old Ouattara and 76-year-old Bedie.

Once a beacon of stability in a region better known for coups and war, Ivory Coast has been struggling to hold an election for years.

Gbagbo's five-year mandate officially expired in 2005, but he extended his stay in office, arguing elections were impossible because armed rebels still controlled the northern half of the country.

The 2007 peace deal broke years of political stalemate, leading to the dismantlement of a U.N.-patrolled buffer zone. But the vote was delayed again repeatedly because of disputes over voter rolls.

More than a quarter of the country's 20 million people are foreign immigrants who came to work on cocoa and coffee plantations in the south. Differentiating them from native Ivorians with roots and names common in neighboring countries like Burkina Faso and Mali has taken years.