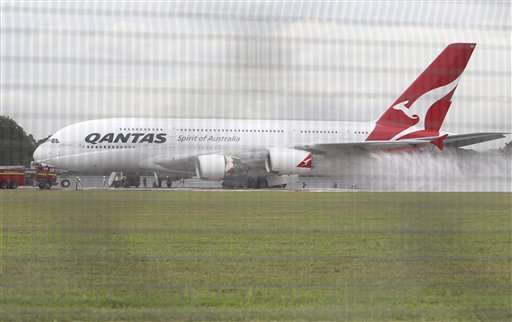 Qantas CEO Alan Joyce says the airline is suspending all flights of its six Airbus A380 jetliners after a mid-air engine problem on a flight from Singapore.

Joyce told a news conference in Sydney today the suspension would remain in place until Qantas was satisfied that it was safe for its A380s to fly.

Joyce said "we will suspend those A380 services until we are completely confident that Qantas safety requirements have been met."

THIS IS A BREAKING NEWS UPDATE. Check back soon for further information. AP's earlier story is below.

SINGAPORE (AP) — A Qantas superjumbo jet made an emergency landing today in Singapore with 459 people aboard, after one of its four engines failed over western Indonesia and following witness reports of a blast that sent debris hurtling to the ground.

The carrier said there had not been any explosion, and that the plane landed safely with no injuries.

Qantas had no immediate comment on whether the engine troubles were related to eruptions of Indonesia's Mount Merapi over the past 10 days. Given the timing of the malfunction, 15 minutes after takeoff from Singapore and before the flight had time to approach the mountain, there appeared to be no connection.

A Qantas statement said the double-decker Airbus 380 plane experienced an "engine issue" soon after taking off from Singapore for Sydney. It made a safe emergency landing in Singapore at 11:45 a.m. local time with 433 passengers and 26 crew on board, the statement said.

"Some media reports suggested the aircraft had crashed. These reports are incorrect. No Qantas aircraft has crashed," it said.

Separately, Singapore's Changi airport said in a statement that flight QF 32 left for Sydney at 9:56 a.m., and "for technical reasons the aircraft turned back to Changi," landing safely one hour and 50 minutes later.

The flight is a regular service that flies between Sydney, Singapore and London. The route is usually flown by one of Qantas' six Airbus A380 that were introduced into service in 2008. Qantas' A380s can carry up to 525 people.

Qantas spokeswoman Emma Kearns in Sydney, Australia, said there were no reports of injuries or an explosion on board. When asked if the engine trouble was related to ash hurled from Merapi, Kearns said she had no further details.

A series of powerful eruptions from Indonesia's most volatile volcano, which was spewing massive clouds of gray ash 310 miles (500 kilometers) west of Jakarta, earlier prompted officials to close some air routes above the mountain.

"We have no way of knowing what at this point caused the problem," said Tatang Kurniadi, the chief of The National Transportation Safety Committee, when asked if volcanic ash could have clogged the Qantas airliner's engine.

Witnesses on the western Indonesian island of Batam, near Singapore and 850 miles (1,400 kilometers) west of Merapi, reported hearing a large blast and seeing pieces of debris — including panels painted white and red — falling onto houses and a nearby shopping mall.

Pictures of metal, some the size of a door, were shown on Indonesia's MetroTV broadcaster, with people milling around.

"I heard a big explosion at around 9:15 a.m. and saw a commercial passenger plane flying low in the distance with smoke on one of its wings," Rusdi, a local resident, told MetroTV.

"The debris started falling on my house."

A British Airways flight suffered engine failure in 1982 after it had flown into a volcanic cloud in western Sumatra and was forced to make an emergency landing in Jakarta.The flight from Singapore to Perth, Australia, plunged several thousand feet (meters) before the engines restarted in the June 24, 1982 incident.

The Airbus superjumbo has been in service since Singapore Airlines took delivery of the first of the A380 planes in late 2007. Qantas now has six of them in service.

Qantas' safety record is enviable among major airlines, with only one fatal crash in its 90-year history — seven people died when a small plane plunged into the sea off Papua New Guinea in 1951.

But there have been a run of scares in recent years across a range of plane types. The most serious — when a faulty oxygen tank caused an explosion that blew a 5-foot hole in the fuselage of a Boeing 747-400 over the Philippines — prompted aviation officials to order Qantas to upgrade maintenance procedures.

On March 31, a Qantas A380 with 244 people on board burst two tires on landing in Sydney after a flight from Singapore.