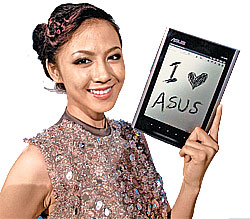 AsusTek shipped more than one million notebook computers in the third quarter in China, notching a growth from its second-quarter total of 850,000 units, IDC said.

IDC forecasts that total shipments of notebooks in China will grow from an estimated 27 million in 2010 to 47 million in 2011, representing a 74-percent year-on-year growth. If this continues, China will surpass the United States as the world's largest single market for notebooks by the end of 2012.

AsusTek shipped more than 2.4 million notebooks in the booming China market last year, and expects a 2010 annual total of between 3.5 million and 4 million units. China accounts for 20 percent to 25 percent of the company's global notebook shipments.

But the portable computer maker, which ranked second in China behind the country's own Lenovo Group, expects a decline of consumer purchases by the end of this year.

The fourth quarter is usually a weak season for retail sales in China but there is strong demand for commercial computers, such as from cooperate clients and in governmental tenders, Yang added.